This piece of shit Australian Defence Force representative is a national embarrassment. How can we possibly continue to justify our presence in Afghanistan and other parts of the Middle East when time after time, hate-filled racist oxygen-thieves bring the entire ADF reputation into question?

In Afghanistan, as I understand it, the majority of the work of the ADF nowadays is in peace-keeping and re-building, with combat with insurgents less of a focus. But this S-bend blockage of a human has no issues posting pictures of Afghan children and publicly calling them ‘little afganie (sic) fuck heads’, and all that and more for the adult Afghan citizens.

Add that to his sickening public Facebook profile with some racist ‘jokes’, references to ‘niggers’, photos of him being drunk from drinking Jim Beam and of course the trademark black suit/black shirt/coloured tie/heavily gelled hair combo that’s synonymous with bogan fucktards, and we’ve got yet another antibogan post that not one media outlet in Australia give two shits about.

Shame, shame, shame Chris Woodson. There are so many good men and women in our defence forces and you put shit on them with your disrespectful, shit-for-brains ways. 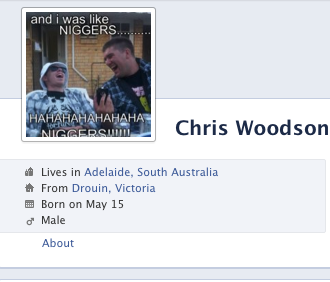 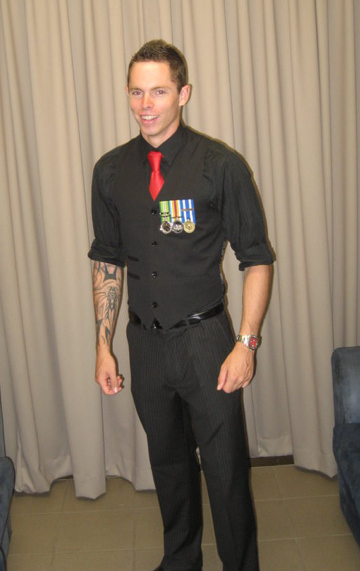 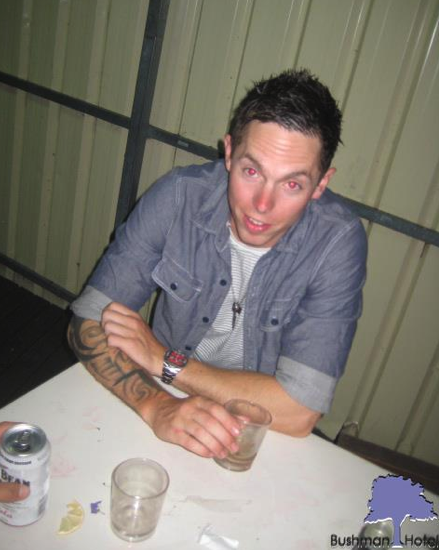 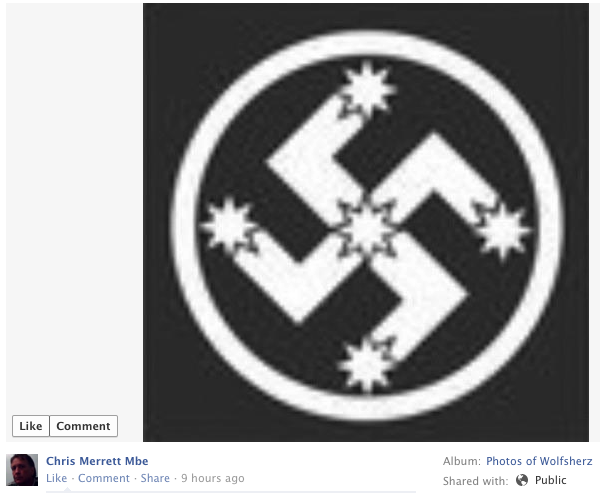 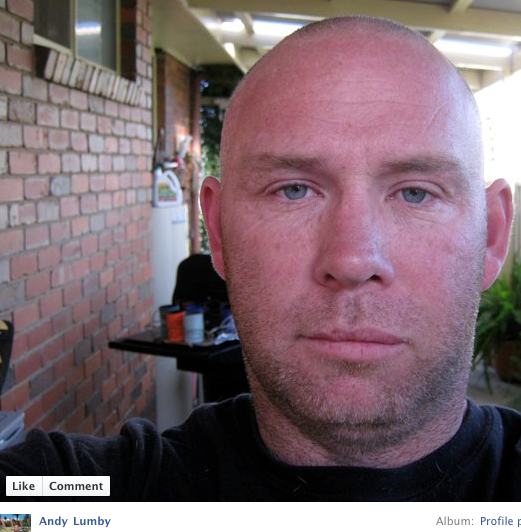 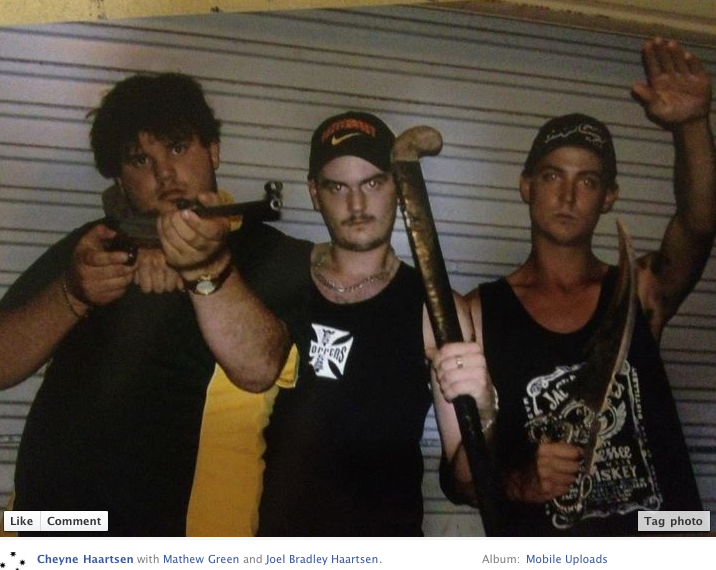 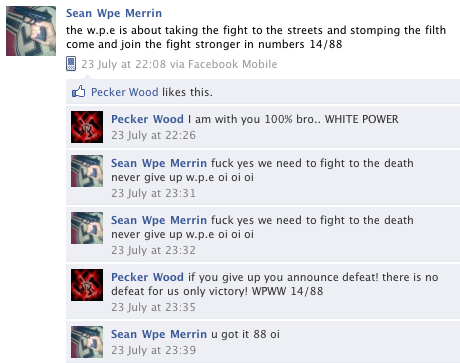 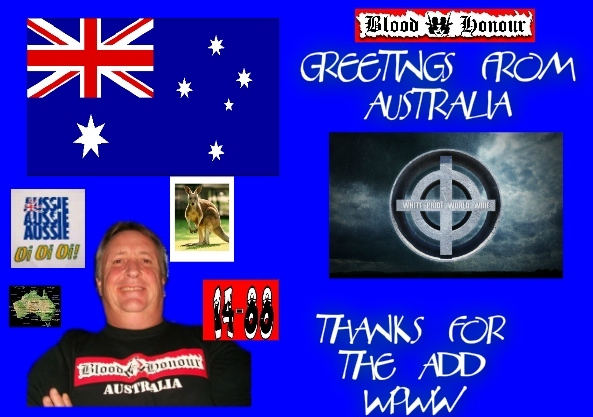 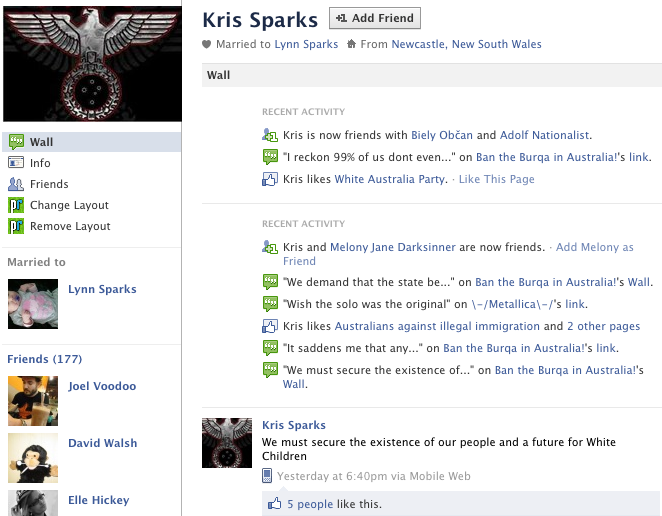 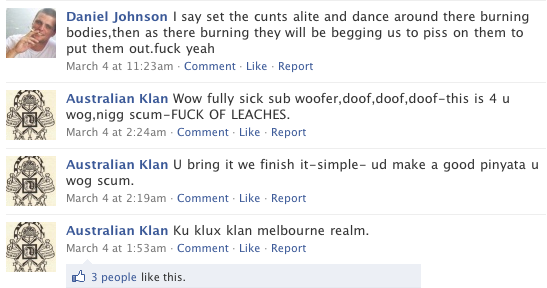 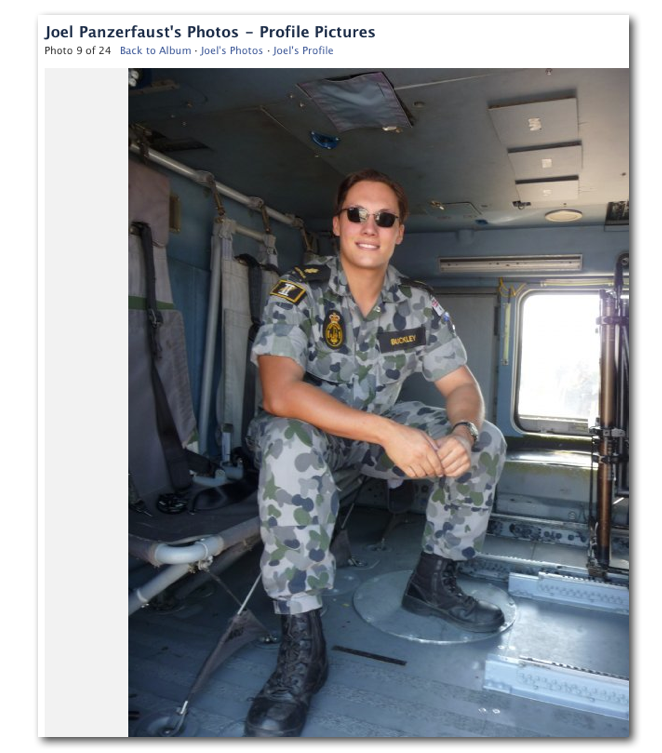 Here’s former ADF mechanic/earthmover, Shannon Austin. He spends a great deal of his life ignoring his children and posting hate-filled rants about Muslims and Aboriginals on the Internet. He has an extensive history of stalking, creating fake profiles, threatening and abusing both men and women who stand up to him.

And yes, the ADF part is accurate.

(Here’s an email he sent to us in response to this post. Make of it what you will.) 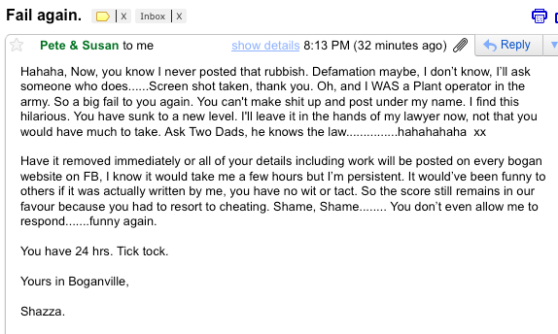 SYDNEY police have charged a former Australian soldier over the creation of a Facebook gay-hate page that targeted four serving members of the Defence Force. The arrest was made less than a month after the Herald revealed the harassment, which targeted an army major, Paul Morgan, two members of the Sydney-based commando regiment 2RAR and another serving soldier. It was also revealed that – despite the Facebook page clearly identifying several dozen serving soldiers – the Defence Force failed properly to investigate and punish dozens of serving members allegedly linked to a social media campaign designed to expose and intimidate homosexual personnel.

Major Morgan, an army psychologist, was also sent a graphic and highly violent email, which police allege came from the former soldier, a Kareela man aged 32. It stated: ”I will cut your homosexual carcass into 100 pieces to feed you to the marine life in Botany Bay.”

The Facebook page was created using the pseudonym ”Steve Austin”. The four serving gay men had their names published on the page, which has since been taken down. It allegedly had links to extremely violent and pornographic videos on YouTube showing executions of homosexuals superimposed over images of Anzac Cove in Gallipoli and flag-draped coffins of dead Australian soldiers.

AN IMMEDIATE investigation has been launched into shocking racist Facebook posts by Australian soldiers in Afghanistan.

And soldiers have been warned they could face military tribunal, censure, discharge or even jail.

In videos, photos and comments posted on the social networking site, troops also allegedly mock those they have been sent to help.

A video has been posted showing the bombing of a bridge in Afghanistan, which was aired on Seven News.

When an Afghan bystander is frightened by the bomb, someone can be heard to say “scared the f… out of that muftee” and “f——‘ boom”.

Several soldiers list their employer as ‘F—— Ranga’, some under their listing for Australian Defence Force.

“I struggle to understand, with all the training that we do and with the quality of soldiers that we have, that that sort of language has been posted,” Major General Symon told Seven News.

He said thousands would be disgusted by the revelations.

“When you put words in the public domain you will be held responsible.

“What is happening here will cause deep offence to a lot of people.”

The inappropriate comments have allegedly been made by soldiers currently or previously serving in Afghanistan.

One man says he’s just done an interview with the army and was waiting for a spot in cavalry.

A soldier has also ticked “like” to a comment on a photo he has posted of an Afghani street, in which locals are described as fags and ninjas.

“Last but not least the poof riding the girls bike mate should have stuck a stick in his spokes then butt stroked him. He didnt do anything he just pisses me off. Happy shooting …..”

It is believed the person who wrote the comment was also a soldier.

“It undermines Australia’s mission, it potentially places at risk the safety of other soldiers and it does nothing to promote peace, justice and harmony in the region,” Mr Lynch said.

“It’s very concerning that Australians acting in an official capacity conduct themselves in this way.

“I would hope that the ADF (Australian Defence Force) has in place good mechanisms to ensure that this kind of conduct if not repeated, that people are held accountable and the importance of being exemplars of human rights is reinforced as being fundamental.

“This is not conduct which reflects the ADF generally and Australians attitudes generally.”

Federation of Ethnic Communities Councils of Australia chair Pino Migliorino said it was important that the soldiers’ comments not be demonised but be shown to be inappropriate.

“I think what’s really important is we expect behaviours of our armed service people which are beyond this,” Mr Migliorino said. 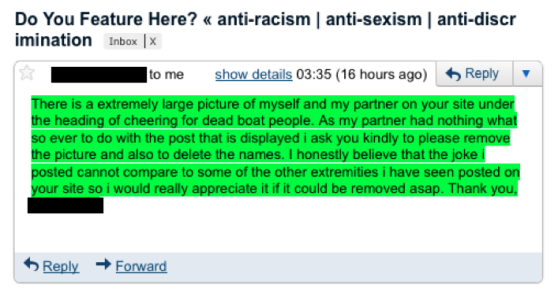 2. He is pictured in full Australian Defence Force uniform in one profile picture, and posing shirtless in front of Nazi insignia in another.

3. He represented the Australian Protectionist Party and ‘kicked lefty butt’ in the progressive Sydney suburb of Newtown while on an anti-immigration, anti-Islam rally.

Anyone have any issue with him representing our country overseas?

Remember this guy? Yeah, a while ago he had some pretty awful things to say about Muslims in a public forum. Something that we thought was against the law in this country. He even said the things he said using his real name, and a profile picture showing that he was a serving soldier in the Australian Defence Force.

We’ve now obtained more from this leper, admitting to attending an APP rally staged in the harmonious suburb of Newtown in NSW, and beating up locals who turned up to protest their presence.

If this isn’t reason for dishonourable discharge, what is?

A while ago, theantibogan caught wind of a member of the Australian Defense Force who had some pretty negative things to say about people whose only crime was to believe in their religion. At the time, it was hard to ignore the fact that he was overseas, most likely posted in a country where every citizen he met believed in that same religion. It still is hard to forget.

It would seem that because of the attention he found thanks to theantibogan, he has decided to change his name on Facebook. Sadly, he wasn’t bright enough to change his profile picture, which still shows him in uniform – uniform that has his real last name plastered across his chest. 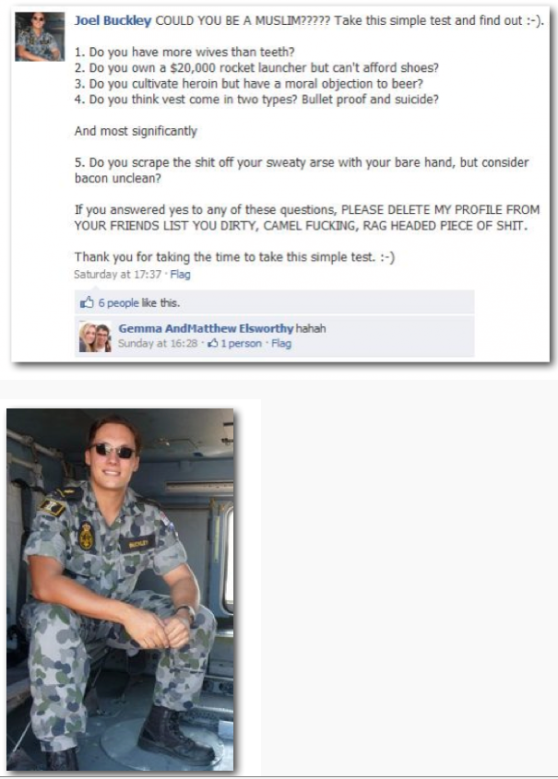 The poor sap has now been informed of his rookie error, and has transformed again. The anti-Muslim sentiment remains, as does the blatant childish stupidity.

Could you be a bogan? Take this simple test to find out!

Does your daily alcohol consumption outweigh the amount of teeth you have?

Are you frightened of homosexuals, intelligent women and people from non-Anglo backgrounds?

Do you stand up for the rights of women but then treat them like pieces of meat? 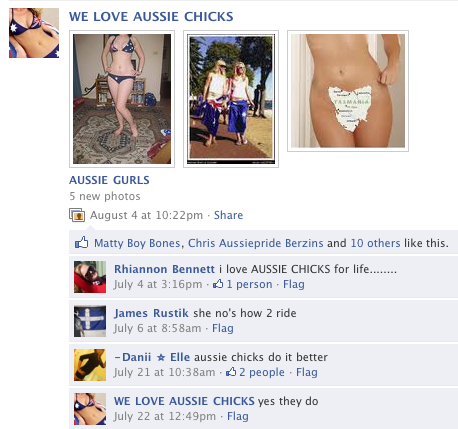 Do you berate Aboriginal people for their inability to get jobs and their addiction to alcohol before sitting around your housing commission home sinking piss and then heading up to your local Centrelink office to collect Australian taxpayer’s money? 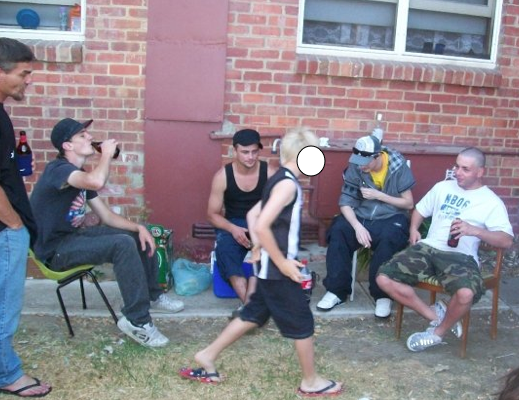 Do you and your friends have more babies than previous boyfriends/girlfriends?
Do you believe you have a sense of humour because your pass on lame jokes that alienate already marginalised groups of people in our community?
Have you been charged for assault after hitting a woman or getting in a drunken brawl while intoxicated?

If so, please don’t even think about calling yourself an Australian, let along ‘defending’/‘representing’ our country.