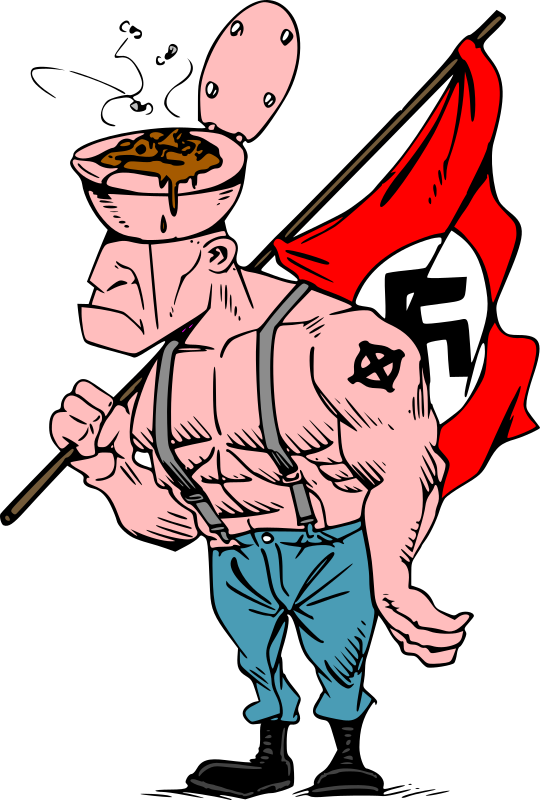 It was truly excellent to see you denouncing the racist buffoon Karen Bailey for her racist and child-abusive rant on a Sydney to Newcastle train last week. I mean, that’s pretty much what the majority of your job is, right? It’s up to you to hold a light to racism in our society when and where you see it and speak to the public about why it is unacceptable. Maybe change a few minds, educate a few dopes? It was also inspiring to see the NSW Police act so quickly to find the woman and have her charged. They even prepared statements to address media outlets.

So why the continued silence regarding online discrimination?

From Nazis and white supremacists to homophobes and sexists, from rape enthusiasts and disability abusers to anti-immigration nut jobs, the Internet is rife with discrimination produced in Australia by Australians who are happy to give their name, location, employment status and photo to their comments. We’ve been immortalising the comments on our website for years. Yet it takes a 50 year old dunce on a train to say the word ‘gook’ and everyone just loses their shit.

So where are you? Where are the State and Federal Police? Nowhere to be seen. It’s depressing to say the very least. Our Race Discrimination Commissioner is absent and our authorities lack interest and power.

So the old biddy has said her apologies under the pseudonym of Sue Wilkins and everybody is breathing a sigh of relief. Thank goodness we got through that, right?

These opinions exist in our society. It’s a fucking plague. These opinions are validated by oxygen thieves like Scott Morrison, Cory Bernardi, Tony Abbott and their bumbling supporter sidekicks and accompanying Murdoch led media circus. These hate-filled discriminatory opinions bubble to the surface on public trains and buses regularly but even more regularly online and nobody appears to give two shits either way.

How can people expect to feel as though they are safe in this country if their sexual orientation, physical ability, country of origin or religion are the focus and target of so much anger and hatred? Who is there to help people who read this shit online? Who is there to help the people who are the victims or onlookers to vile discrimination? I’ve interviewed anonymous police officers several times and have been told regularly that police will not bother charging a person unless they’ve physically abused someone. The Telecommunications Act lacks teeth and it lacks officers who are willing to go after these people.

Here are some screenshots that were taken today. They are from a Facebook group set up to oppose a mosque being built in Kalgoorlie. I’m sure if you ask them on Today Tonight they’ll tell you that their opposition exists because of ‘parking and traffic concerns’ or some other bullshit. But it’s what’s simmering underneath and boiling to the surface of social media that is the all too common truth. Australia is a fucking racist country. End of story.

Do something about it Tim.

T shirt and all.

Now you may recall that the openly gay Sean O’ Connor actually supports same sex marriage. His cognitive dissonance with his own leader and his own party must be of epic proportions. It certainly showed in his preference deal.

But it pales into insignificance against that of his big fan. Though with fans like Keith, Sean might feel he doesn’t need enemies.

Note that Keith takes his own sad selfies in his own bedroom mirror. Dateless and desperate?

Anti-semitism and hatred of black people are not likely to win friends and influence people, nor to attract any votes for his favourite candidate.

Keith doesn’t like asylum seekers either and rather fancies them as targets.

Not much compassion for foreign aid recipients either.

You be the judge. These flyers were dropped in mailboxes in the Rankin electorate. This is clear propaganda suggesting that Labor would take people’s property if elected in order to install the NBN.

One day recently a guy decided to make a website.

We liked this guy’s work so much we linked to it on Facebook and also published individual pics from it on our Facebook page.

However the Liberal supporter swarm did not like it very much, probably because it highlighted their dodgy propaganda.

People with extreme notions of self-entitlement and a born-to-rule mentality tend not to like when little guys take them on.

We know he wasn’t threatened just because he wrote a few swear words.

He was threatened because he actually dared to compare Labor and Coalition policies in a number of critical areas – and guess whose policies came out better?

We have contact details and a name for the little guy but we will not publish them.

So let’s see what his attackers have done.

1. Alleged Liberal Party lawyers demanding his personal details from his ISP – this is illegal by the way without a subpoena

3. Threatening him regarding his career

Sound familiar? We know only too well what these creatures are capable of once their mendacity is exposed

You can check out their high “calibre” here

A Liberal candidate in western Sydney has said she believes asylum seekers are contributing to outer-suburban traffic jams.

”[Asylum seekers are] a hot topic here because our traffic is overcrowded,” Fiona Scott, the Liberal candidate for the seat of Lindsay told the ABC’s Four Corners program.

When asked to explain her view she said: ”Go sit on the M4, people see 50,000 people come in by boat – that’s more than twice the population of [western Sydney suburb] Glenmore Park,” she said.

Ms Scott is challenging Assistant Treasurer David Bradbury in the September election. She came to prominence last month when Tony Abbott controversially described her as having ”sex appeal”.

Refugee Action Coalition spokesman Ian Rintoul described Ms Scott’s comments as ”shockingly ignorant” and said there were only a few thousand refugees in the area.

On the issue of asylum seekers, Mr Rintoul said Ms Scott’s comments ”reflected the scaremongering and the xenophobic views of the Coalition”.

”She should be well informed, but she is saying absurd and ridiculous things.”

Mr Rintoul estimated that just a few thousand refugees, mostly from Afghanistan and Iran, would call suburbs in the seat of Lindsay, which includes Emu Plains and Castlereagh, as home.

”She has characterised [refugees] as creating social problems,” he says. ”Western Sydney is full of migrants who have very often experience some kind of discrimination and these negative views on asylum seekers will do no good to her campaign whatsoever.”

And of course some humour followed

A Liberal Party candidate proposed a radical new policing system in which criminal suspects would be injected with satellite-trackable microchips shot from a ”high powered sniper rifle”.

Ray King, who is contesting the western Sydney electorate of McMahon, was behind the idea, which he claimed would improve productivity of the NSW Police Force.

Mr King, a former police commander in Liverpool, landed in hot water on Friday over critical comments he made about burqas at an election campaign function where guests included the disgraced former detective Roger Rogerson and current assistant police commissioner Frank Minnelli.

In 2011, Mr King outlined his ideas in a 12-page essay, Microchipping of human subjects as a productivity enhancement and as a strategic management direction of NSW Police.

The paper was submitted to a police leadership conference shortly before he was promoted from Cabramatta to Liverpool.

”What has limited our effectiveness for decades has been the restriction on how police obtain information and having to prove before courts that we have acquired our information by legitimate means,” he wrote.

”What I propose and will endeavour to convince the reader of, is the implementation of microchip technology similar to that used in controlling the activity of domestic animals, will quantifiably enhance the success of law enforcement.”

The most controversial part of Mr King’s plan was the means by which microchips would be inserted into the body. He named Danish company Empire North as having patented the ”ID Sniper Rifle” as the ”long-distance injector” of the microchip.

But a search for Empire North in Copenhagen suggests the company does not exist and the ID sniper rifle is actually part of a plot of a Danish sci-fi docu-drama called Empire North.

A Liberal source said the essay was a ”futuristic scenario” but, in the Liverpool Champion on March 30, 2011, Mr King raised microchipping as a genuine prospect. ”I’m an advocate for this type of technology,” he said. ”I think we need to explore the use of microchips to help put criminals behind bars.”

Proof that ratbags are not confined to the fringe parties.
Read more here

Those who own a business or work in HR must also know the feeling when you hire a candidate and they don’t quite match all the glory of their CV. Someone you thought to be qualified and have the necessary skill-set when they rock up to work it turns out they aren’t fit to mop out the toilets.

A similar dilemma hangs over the heads of voters of the Greenway electorate in Sydney’s western suburbs.  They are asked to vote for someone they don’t know much about and make a leap of blind faith…

Mr Baker, whose handle on the site is “Baker” tells the joke of a “dishy blonde” in one post.

The joke contains reference to a “stripper on my bucks night that I shagged on the pool table in front of all my mates while your mate whipped me with some wet celery and stuck a cucumber up my a…e?”

How on earth did he get through the vetting?