Remember this guy? Last year Liberal Party stalwart Joseph Adams got himself into a bit of bother when it was revealed that he is in fact a 100% snaggle-toothed obsessive Facebook Islamophobe.

A highly embarrassed Liberal Party acted swiftly to rid itself of its shameful scion. 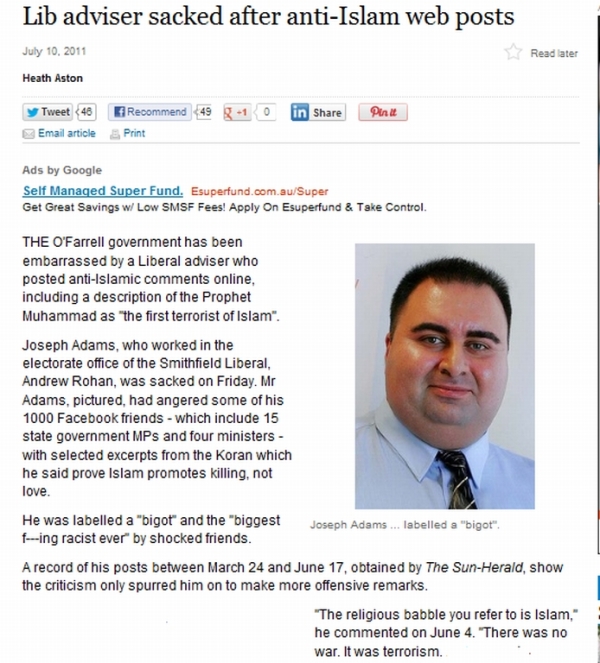 Undaunted by his rejection for the role as a future Robert Menzies, Adams proceeded to create his own party of fellow phobes. 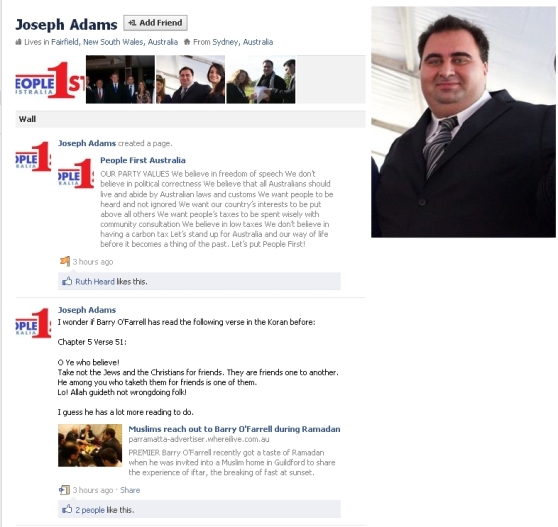 Not satisfied with this, Adams then joined illegal non-citizen Martin Brennan’s rag-tag APDM, an even scruffier offshoot of the ADL, dedicated to ridding Straya of “teh_mooslems” by all possible means, including violence and intimidation. After all 1% of the population is pretty scary if you live in the monocultural bits of Queensland where Muslims don’t even live and you have this, you know, anger about fings like yer know Vegemite n scary ladies in veils, anxieties that can only be relieved by pumping up and bashing some hapless minority group or other. 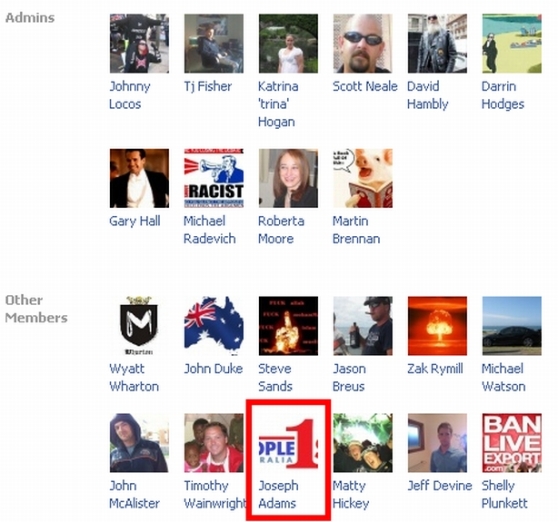 In the name of xenophobic solidarity Adams is only too willing to embrace his fellow Islamophobes as they form yet another hate group. 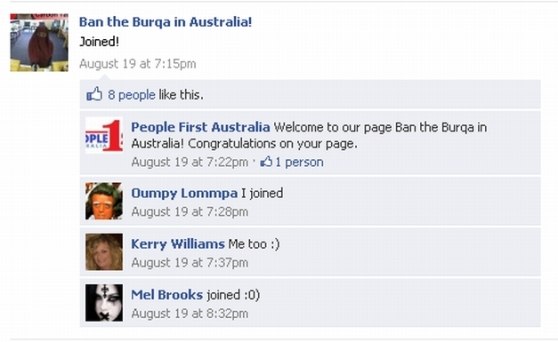 To keep the ole hate going, what better than to join in the quest to rid Straya of extremist nutjob Ibrahim Siddiq-Conlon.

Even if it involves murder. 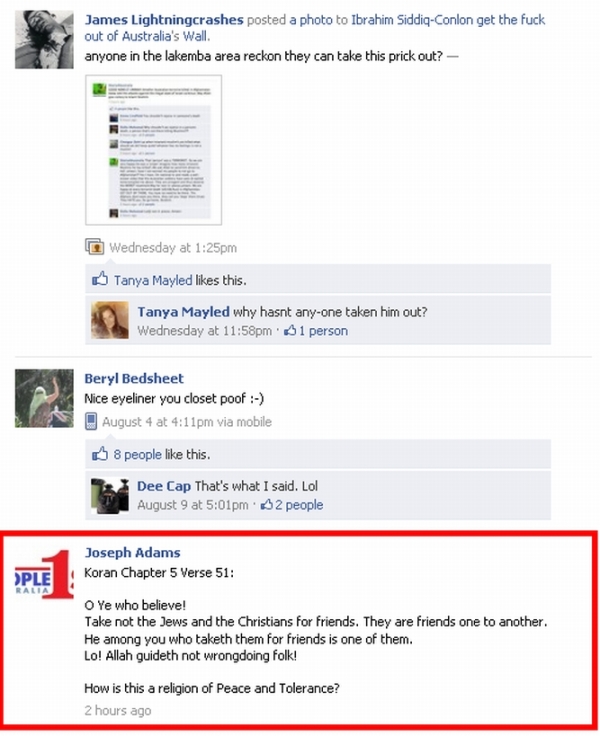 Adams must have cut and pasted this Qur’an quote a million dreary times but he never gets tired of it. 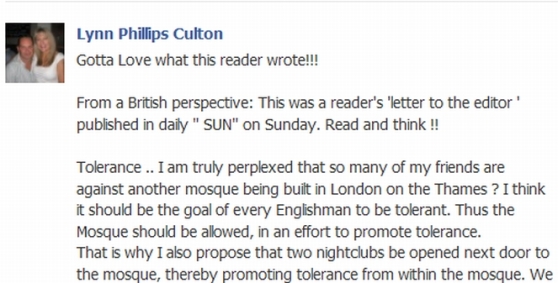 We can’t accuse Joey of not being on the cutting edge of current events. Here’s his bunch of haters responding to the latest Muslim protests. 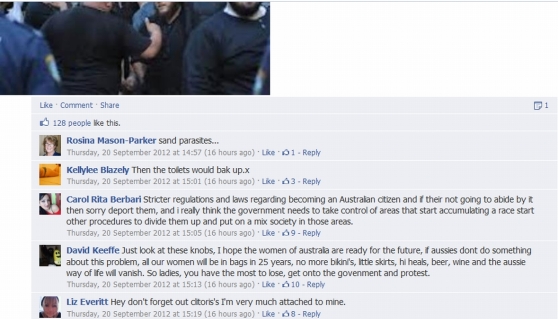 Veteran bigot Rosina leads the charge followed by Kellylee and Carol who wants a “mix” (sic) society – presumably one where everyone emulates the lifestyle of the bogot.

Now David has no doubts at all as to what the “Strayan way of life ” is. Scantily clad women and booze.

And Liz parades her clitoris for all the world to see. No thanks Liz but maybe you can get together with Dave and educate him.

Q: What’s the difference between a pub and a clitoris? 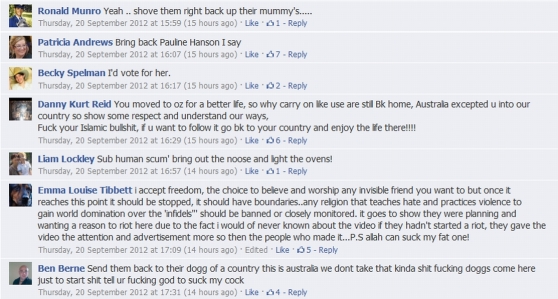 And while Emma strains  dictionary and thesaurus in her attempt to sound intelligent, Ben wants his cock sucked.

Amazing how so much of the hatred ends up revolving around sex.

Obviously copying Emma’s efforts at improving her English, old Norm also manages to do some interesting stuff with mixed metaphors.

We wish we had a photograph of that one Norm.

Now this would have to be one of the dumbest posts we have seen. Guess what Daniel, see if you can figure out where Gallipoli is and whom the Anzacs were fighting.

And guess which victorious nation commemorates Anzac Day as well? And what the religious faith of most of its population is? 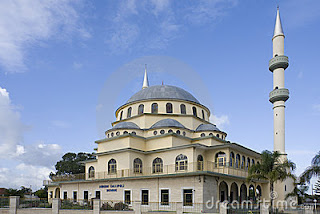 This Sydney mosque is called the Gallipoli Mosque. Wonder if the bogots know why? 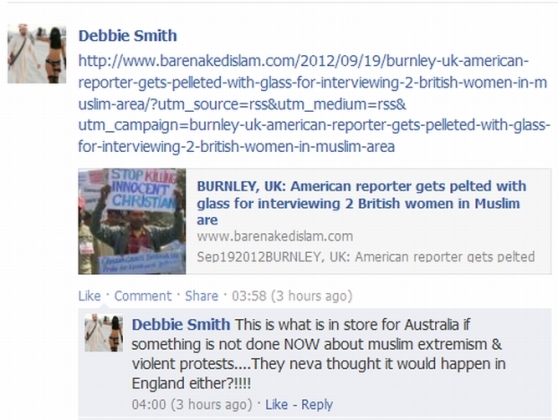 We will let veteran bogot Debbie Smith have the last word as she diligently posts up yet another spurious headline from yet another Muslim hate site.

Fetish party or protecting us from “teh_mooslems.” ?

Could be a nice home for Corey Bernardi once he is kicked out of the Liberal Party.