Reblogged from Waking Up In Geelong

Last night I was headed out of the city on a packed route 57 tram, along with the usual Wednesday night crowd of people headed for the night market held at the Queen Victoria Market. Among them were a number of people chattering away in a foreign language, when a tattoo covered troglodyte said under his breath to his scraggy looking girlfriend:

Such a classic line!

Our tram had been stopped outside the Queen Victoria Market to drop off passengers, and I was sitting in the seat behind him, so I told him to watch what the hell he was saying. He got up out of his seat to have a go at me, spewing forth the usual bile that racists do when confronted, and asking me if I wanted to talk it outside. I just stayed in my seat, while he had his sleazy lady friend backing him up from their original seat, when some random woman down the other end of the tram told him to shut up and piss off.

Our tram driver, who was a middle aged woman, eventually got onto the PA system and told the guy to either quiet down or get off the tram – he reacted to that by punching the perspex door leading to the driver’s cab, and asking me another time if I wanted to take it outside – again, I didn’t respond!

Eventually the clod realised he had been outgunned, as he and his companion left the tram, before punching the side of the tram near where I was sitting, and then spewing some more racist bile venom to the crowd assembled at the tram stop.

At this point I remembered I had my camera in my bag, and the tram had opening windows, so as the tram departed I videoed his reaction.

He then ran after the tram, faster than he ever had in his life, but couldn’t make it far – giving up in the middle of the Victoria and Elizabeth Street intersection. 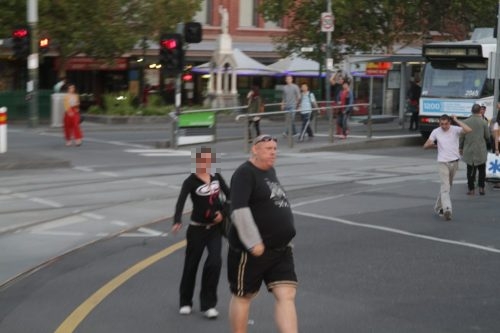 Afterwards a half dozen passengers came up to me and asked if I was okay, and that I did a good job standing up to the racist boor. As well as that, I was glad to have a random woman call out and provide backup in the heat of the moment – when a big guy is throwing their weight around, understandably most people are afraid for themselves first.

Another line the bigot used was:

If I went to Russia then I would speak Russian

For a start, I doubt this guy has ever been to Russia, and if he did, I doubt he and his life partner would have learned Russian – I visited said country back in 2012 and only learnt four Russian words:

Putting yourself into harms way by telling fat racists where to go probably isn’t the safest thing to do – a safer alternative is to abuse them from an open tram window once they leave the vehicle, because they can’t do anything back to you!

The tram driver also made a police report, which Yarra Trams is following up:

By lunchtime The Age had put together a piece on the topic – Yarra Trams investigates alleged racial abuse.

And some of the racist comments are real doozies.

8 thoughts on “Telling a racist where to go”