For those who don’t know Wyatt Roy is the small but perfectly formed (and very young) LNP MP from the very marginal Queensland federal seat of Longman.

We must admit we were worried about Wyatt’s welfare when he arrived in Canberra and was immediately swooped upon by Christopher Pyne. However so far the strawberry farmer has extricated himself into the orbit of Malcolm Turnbull, kept his nose clean and has been commendably quiet as befits someone who has little life experience. 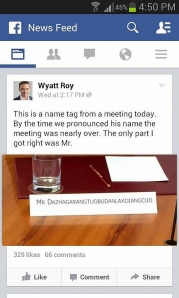 Oh dear. We think this might be a poorly rendered nametag for a Chinese official of Tibetan origin by the name of Tashi Jiangcuo (or Xashi Xiangguo).

But it might have been a very good idea if Wyatt had done his homework before making lame jokes on Twitter because he comes across as a culturally insensitive hayseed knob.