So pretty one day

So bogan the next

Or so bogan pretty much all the time??…

It starts with Mumma Paula going off about a simulation conducted at the local TAFE as part of her daughter’s Business Admin course.

The simulation in question was a mock Board meeting where students assumed certain roles and planned a project. In the case of this particular TAFE class, the project was to be a fund-raiser for refugee causes.

However xenophobe Paula did not approve of said topic. 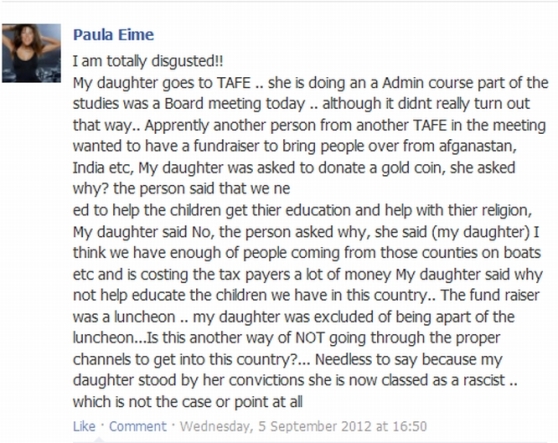 A procession of moans then followed from Paula’s fellow xenophobes, including the usual bleats about “teh_homeless” and “teh_aborigines”. Only one missing in this instance was “teh_pensioners” AKA “our elderly” – you know, the ones the xenophobes usually stick in nursing homes?

Truth is, racists and bigots could not give a stuff about disadvantaged Australians, but oh boy, they are handy to trot out when they want to justify turning their backs on refugees and asylum seekers.

And note the arrival of Lulu Gray, like Valkyrie descending. We doubt if Lulu even knows where Adelaide is but that doesn’t stop her.

We are not sure either what Lyn means by “got out of hand”. It’s a simulation Lyn, probably as part of an assessment task. If a student does not participate in a VET (Vocational Education and Training) assessment for some reason then they have the opportunity to do the same task again or an alternative task  – though we very much doubt if xenophobia is a valid or acceptable excuse.

That is the case whether the student is either a full-time TAFE student or a school student doing a VET course as part of their senior school studies. Same rules for both.

Now we hear from Mumma’s daughter herself.

Well Hannah you have lost our respect. Not only that, if we were you we would be concerned about our spelling and grammar skills. No employer is going to hire an admin assistant who is (to put it kindly) deficient in both.

And that is not even touching the issue of employing people who make racist comments on social media and their suitability as employees in a modern workplace.

Perhaps Today Tonight’s next story should be on the dark underbelly of racism and bigotry in their fair city.