Coalition bully-boy Scott Morrison has had plenty of opportunity since the elections to chest-beat, yap and howl over asylum seeker policy and so-called “border protection”..  We well remember the three-word “Stop the Boats” bogan slogan and brand-new hot Lindsay MP Fiona Scott wailing about the millions of leaky boats heading up the M4.

Now as promised they have found a two-star general, promoted him to three-star general and made him the fall guy for when things go wrong, which will happen – we would only need another Siev X  to watch this failed process in action.

We have no doubt that the newly minted Lieutenant-General is a fine soldier and good bloke. He probably deserves a VC for having served under John Howard in administrative as well as combat roles.

However he is now the bombastic Morrison’s scapegoat for anything that goes wrong with their boat policy.

And rest assured, this government will be very keen to find scapegoats for anything of theirs which goes wrong. Especially if they can sheet the blame to a soldier or public servant. 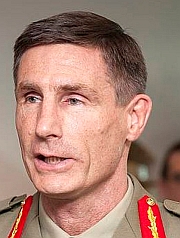 We remember how keen the Coalition were when they were in Opposition from 2007 to stir up the bogots into a hate frenzy every time a boat arrived, to the extent that racism is now an integral part of Coalition policy. We remember how they poured scorn on any attempts to humanise Australia’s approach to refugees and asylum seekers. We know the awful far right Institute of Public Affairs (IPA) has given them a shopping list of demands which include the abolition of the AHRC

But two men, Christmas Island locals, are trying to shine a light on the shrouded, ridiculously-titled “Operation Sovereign Borders”.

One of them is Gordon Thomson. Gordon Thomson is the Secretary of the UCIW, which covers all workers on the island except for those in the AFP.

Via his Twitter, Thomson is keeping the rest of the world informed on boat arrivals.

Thomson has long advocated for better treatment for asylum seekers incarcerated on Christmas Island. He is now providing an information source to the public on boat arrivals. The service the government will not give you.

The second man is Jon Stanhope, former Chief Minister of the ACT and now Administrator of Christmas Island.

Stanhope also has long advocated better treatment for asylum seekers. As a public servant and former Labor politician he is likely to lose his job as the new regime purges the public service to make room for its yes-men.

So a heads-up to the bogots. The boats will still come.