Every year at this time, and quite often throughout the year, we see and hear the continual bogot lament about Christmas.

According to them, Christmas has been somehow banned in our public schools and by local Councils, people are not “allowed” to wish each other Merry Christmas, Muslims want Christmas banned etc etc ad nauseam

Some time back TAB posted the burblings of a fake nonentity calling itself “Awol Partydrunk”, who had sent a message to a young Muslim woman. We believe “Awol” has thankfully disappeared from Facebook, presumably up his own arse.

We are waiting for the bogotariat to present us with ANY proof that Christmas decorations, Christmas lights, Santas or any other festive paraphenalia has been banned from anywhere in Australia. However, proof and evidence are dirty words in the bogotverse, and they love posting misleading emotive rubbish like this to fire up the rabble. 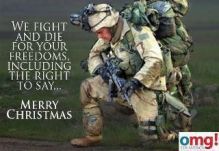 In fact if we were one of the US soldiers pictured we’d be insulted to think that picture was being misused by the very racist and bigoted ratbags who are the real enemies of a free society.

Auburn NSW has a Muslim population of about 16% of a total population of 79,000. The local Mayor is a Muslim, as are many of the Councillors. According to bogot mythology there should be strong resistance to, if not an outright ban, on Christmas celebrations.

And you want to know where the sole instance of Christmas decorations being “banned” that we came across originates from?

one small town in Israel

And it is certainly not a universal practice in Israel.

And according to a Jewish writer, a rabbi,  this is what happens in London

A happy festive season to all our fans and friends of all faiths and none. Bah humbug to our enemies