Nathan Pollock, obsessive user of Second Life believes that all Aborigines should have been shot by the Brits.

Thanks Nathan. As you posted your views so publicly, you won’t mind us sharing them with a wider audience.

Visit the halfwit here. Not much to see other than the fact that he has lost touch with reality and lives his life playing a video game in which he features as a young tanned and toned surfer teen.

Shoot all wog cunts. Because all of them ‘start shit’. What ‘shit’? Is there any specificity in this claim? Or just a call for genocide?

Thank you for this irrelevant mindfuck Aaron Ballhause (of Southern Cross Soldier association). 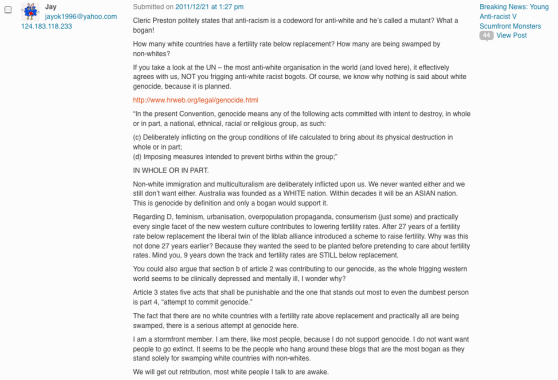 Here is your response, you attention-starved dropkick.

“Cleric Preston politely states that anti-racism is a codeword for anti-white and he’s called a mutant? What a bogan!”

Racism is a combination of prejudice and power. And sadly prejudice is a deeply ingrained human trait. Globally, white people are the dominant group, and in politics, economics, the media and all aspects of society, this power is used every day. It starts from the top and filters down to white people everywhere, regardless of their individual economic situation. At the highest level, when President Bush tells Palestinians a different leader must take the place of the man they elected, he’s treating them as second-class human beings. When the leaders of western economic powers deny fair trading terms to African countries, they are doing exactly the same. And the images of these pathetic victims help fuel more stereotypes about their “inferior” status. Every day the white power structure – be it global, national or local – makes decisions which impinge on the lives of non-white people.

“How many white countries have a fertility rate below replacement? How many are being swamped by non-whites?”

Statistically, white people make up approximately 10% of the global population, based loosely on definitions of black and white. In 1950, white people made up around 26% of the global population. But with 74% of the world’s non-white population also procreating, did you really expect your whites to make up ground? And how do you categorise whites and blacks anyway? If we say that Africans are considered ‘black’, does that categorisation apply equally to Nigerians, Egyptians and South Africans? You’ve got one choice Jay – get the fuck over it. Being a part of a scungy, largely-unknown underground white supremacist society in a country that makes up less than 3.5% of the global population isn’t going to save the ‘white’ species you dopey motherfucker. It doesn’t matter how many Internet forums you post your rehashes on, nor does it matter how many tissues you wipe your cock over after doing so, you’re part of the minority – despite what your back-slapping comrades say.

“If you take a look at the UN – the most anti-white organisation in the world (and loved here), it effectively agrees with us, NOT you frigging anti-white racist bogots.”

LOL okay darling, whatever. Let’s take a closer look at the UN Convention on Genocide:

In the present Convention, genocide means any of the following acts committed with intent to destroy, in whole or in part, a national, ethnical, racial or religious group, as such:

“Non-white immigration and multiculturalism are deliberately inflicted upon us.”

Perhaps, but immigration does not (a) kill white people; (b) cause physical or mental harm to those who didn’t already have it; (c) contribute to the physical destruction of our country or people; (d) prevent white people from fucking; (e) transform white people into non-white people.

“We never wanted either and we still don’t want either.”

Oh poor baby. If you’re feeling particularly Google-savvy, you may want to provide evidence that the wider population in Australia opposes multiculturalism. You won’t find any national polls or surveys that find that the majority of Australians are with you, only the contrary.

“Australia was founded as a WHITE nation. Within decades it will be an ASIAN nation. This is genocide by definition and only a bogan would support it.”

Australia was founded as a white nation because the first people to come here and steal land off the Indigenous Aborigines were white. That was over 220 years ago, long before the Internet and your circle-jerking crowd. Now, this may come as a bit of shock to you, but there’s actually no such thing as a pure-breed Australian. Nope. There is such a thing as descendents of British convicts, and as far as we go – those direct descendants (ie. descendants of British convicts who have only procreated with descendants of British convicts) make up far less than half of our national population. That means that globally, ‘true-blue white Aussies’ make up less than 1% of the population. It’s inevitable that there will eventually be more Asian-looking people in our country over time. They’re already here, and they’re contributing to our society, while continuing to produce Asian-looking babies. Deal with it. It is NOT genocide, and here is why:

White people aren’t killed in Australia as part of a conspiracy or governmental/dictatorship movement. Nor are they prohibited from procreating – moreover they are encouraged. The number of white people in Australia, and globally, will increase. The percentage of white people (and Australians in particular) as a comparison with the global population will decrease. Let me know if you’d like a diagram.

“… the liberal twin of the liblab alliance introduced a scheme to raise fertility.”

“You could also argue that section b of article 2 was contributing to our genocide, as the whole frigging western world seems to be clinically depressed and mentally ill, I wonder why?”

Yeah okay. Maybe you are mentally ill and depressed, but let’s throw in some facts just to add to that chip on your shoulder:

* Standard of living in Australia

“I am a stormfront member. I am there, like most people, because I do not support genocide. I do not want want people to go extinct.” 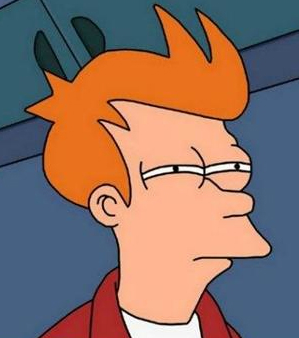