However community leader Dr Jamal Rifi says the mosque had no intention of supporting the Islamic State.

“Probably this flag should not have been put for an auction,” Dr Rifi says.

“But the people made this a couple of months ago, well before the atrocities of the barbaric state. It was a gesture mainly to raise some funds for the Markaz Imam Ahmad mosque in Liverpool. In no way did they want to show any support for the barbaric state and in no way was it endorsing their atrocities.”

Dr Rifi says the flag has significance to all Muslims, and does not belong exclusively to the Islamic State.

“It is a flag that all Muslims aspire to because it is the first flag that flew with the name that there is no God but God, and the Prophet is the messenger of God.”

We can sympathise with Muslim community leader Dr Jamal Rifi when he condemns the misuse of the Shahada flag by the ratbag riff raff nutjob thugs of IS.

Because in this country we have the Eureka Flag, the symbol of the Eureka Stockade and long the banner of the labour movement,  which has been similarly hijacked and misused by ratbag riff raff nutjob thugs from “patriotic” far right organisations with ties to neo-Nazis.

So Mike, are you going to stop all those far right groups from trashing our Eureka flag? Or is it only important when you get a chance to sink the boot into the Muslim community?

The Muslims want their ancient Shahada flag back. And we want our Eureka flag back.

Meanwhile, as reported by the Brisbane Times

Here is a tussle for a Eureka flag.

We put our money on the CFMEU – after all the Eureka flag is an icon of the working class and the labour movement. It does NOT belong to Fascists. 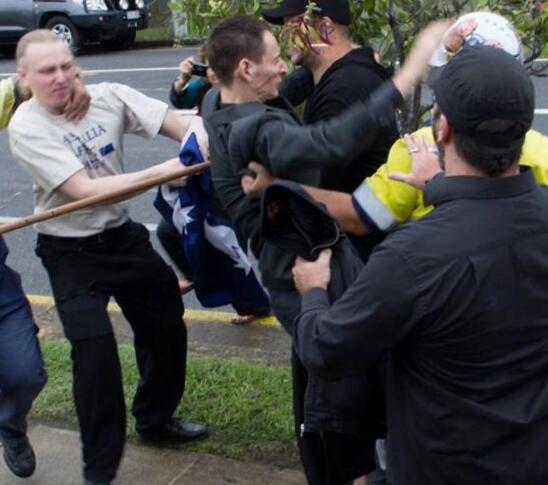 Here are Jimmy’s Jokes annoying police at the Greek Consulate in Brisbane.

Altmax has some great pictures here