Our Twitter feed has recently been visited by an unwelcome intruder calling himself “Greg Jessop”.

Just for now we will pretend it is theoretically his real name, though he does share it with some character in the British soap opera East Enders.

We also wonder why any dumb troll would be foolish enough to use their real name anyway when they post stuff like this one does.

But to show our scepticism we might just call this one Twerp, especially since it apparently gets extremely butt-hurt if its (fake?) name is mentioned anywhere though it quite happily trolls Twitter and serious forums such as Whirlpool.

So eager is Twerp to get its anger off its puny chest it even accused our female Twitter admin of being a …wait for it…paedophile (gasp!). 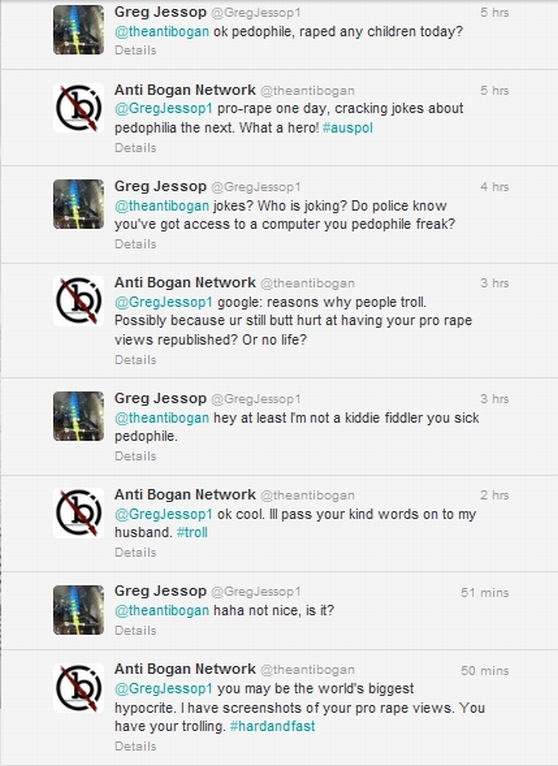 The chances of that being true are one in several billion.

And it is defamatory.

You see unlike Twerp, we didn’t get our legal knowledge out of a cornflakes packet

So Twerp is definitely someone who craves attention. No matter if it is of the kind it will come to regret.

Strangely enough (or maybe not so strangely) our contacts in the mining industry have never heard of Twerp. There is someone with the same surname, same location and the same alleged profession on Linked-in but that is where it ends.

Twerp could be an avid Centrelink client for all we know. Or awaiting Her Maj’s pleasure in a house of correction.

Of course we at TAB include in our number a nuclear physicist, a Nobel Prize winning evolutionary biologist and a three-hat chef who nevertheless doesn’t swear.

See, you can say just about anything about yourself on the Interwebz

And  Twerp’s attacks are not confined to our Twitter feed. Take a look at these.

No one knows why anyone would pick on comedian Corinne Grant but there you go. Anyone who has insights into the bizarre behaviour of nasty misogynist sociopathic Internet trolls like Twerp would make a fortune writing a psychology textbook.

In fact we could probably append that weighty tome to our own star-studded CVs and add the Booker Prize to our list of achievements 😉 .

Not to be outdone in the shock and awe stakes, Twerp then tackles journalist Joe Hildebrand. Not sure what Twerp has got in for Joe, but it could have something to do with Joe’s recently successful Dumb, Drunk & Racist TV series. 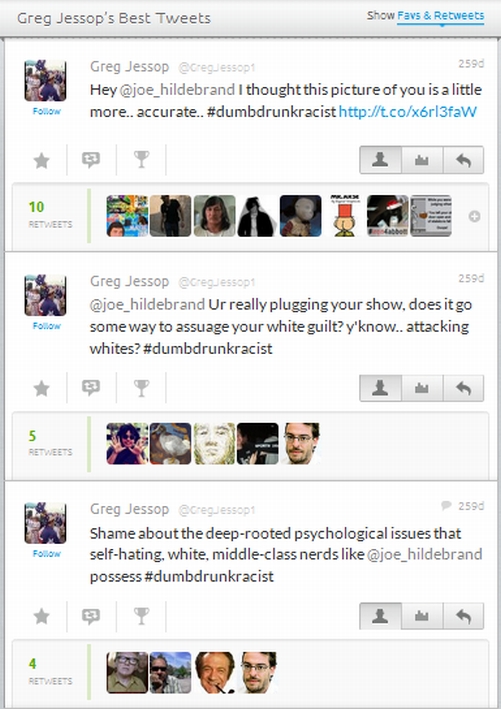 You see, Joe will tell you himself that people who are dumb, drunk and racist take themselves very very seriously. And we can attest that Twerp is definitely the first and last. As for Twerp’s sobriety, we don’t know and we don’t care. It’s his liver.

This could allegedly be Twerp’s liver. Allegedly. Note there is no bacon. So it’s not Strayan.

And just to add the icing to the cake of hate, here’s some homophobia.

If you have a strong stomach you can catch more of Twerp here.

You will note that Twerp’s pose as Twitter’s own self-appointed moral compass and judge of others is not backed up by one of his images of choice. In fact that picture has been passed around the Internet by every Tom and dickless Harry like a lascivious bawd in a Restoration comedy.

But if you want to know the provenance of the image, TAB is happy to provide it. It is part of the collection left by one of Australia’s greatest photographers, Reynolds Mark “Rennie” Ellis who died in 2003.

So we wondered why Twerp was so eager to take TAB to task for exposing the utterances of racists, bigots, homophobes and misogynists to public scrutiny and criticism yet was happy to misuse the work of an iconic Australian photographer as Twerpy trolls, tweets and twats his ponderously humourless way across the Internet.

Whirlpool Forums doesn’t get many trolls but that does not stop the Twerp. Here he is taking the flat earth climate change denier stance, typically without evidence.

And there’s a heads-up for the UN, chief demon of the far right. Foil hats anyone?