Imagine over 2,000 posts on a deliberately provocative question from  shock TV current affairs programme Sunday Night regarding the tragic murder of  Trooper Lee Rigby in London.

Over 90% of the posts are bigoted repetitive rubbish. We feature but a small selection here.

What stands out is that the fact the murder took place in Britain seems to have completely escaped the motley array of ignorant bogots commenting.

What, ONE politician should be watching? Probably an Islamophobe – are you listening Cory Bernardi?

Err Kerry, WHAT dictatorship? The UK? Well some Brits may think so but we don’t think the UK has reached North Korean levels of oppression quite yet.

Umm…derr  “this man” (we assume you mean Anjem Choudary) never lived in Australia. The murder of Lee Rigby took place in Britain. Choudary is British. 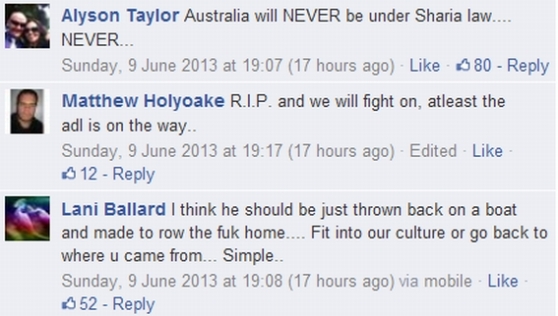 Well Alyson is correct, though not for the reasons she thinks. Australia is a secular country. And we do not have an established church or any other established religious body.

The UK actually does. It is called the Church of England and 21 of its Bishops sit in the House of Lords, the upper house of the UK Parliament. There are no clerics from other religious bodies who have this privilege.

You mean these muppets?

Blake parades his paranoia, followed by Monika who decides the story will “outrage Aussies”. Well we do get outraged when we see a gathering of the most ignorant parading their ignorance on a public forum. Makes us wish we were in a more civilised country.

And Alex Car-name has decided that “AUSTRAILIANS” should form lynch mobs for some non-existent threat.

Now we knew it wouldn’t be too long with so much ignorance stewing before some of Australia’s least wanted turned up to join the hate-fest.

First comes the beige shirts of the (Niqi-less) APP complete with an ad for their dreary web page.

But she’ll collect her taxpayer funding on the way right Melanie?

Oh here’s another Hanson fan who wants the National Anthem before the news each night.

We prefer Clarke and Dawe ourselves, but perhaps we could arrange for the PM to send Noel a reel-to-reel tape in keeping with the quaintness of the sentiment.

And let’s NOT have the guns ever back in this country. Remember Port Arthur, Columbine, Virginia Tech, New Town?

And here’s an old “pal” we featured a while back. Still an extremist nutjob spouting lies.

It looks like Cassandra is bedazzled by yet another foreign extremist.

Hate to bust your romantic balloon Cassandra, but Wilders is a bigot.  And his party has actually lost support.

It was only a matter of time before “Debski Bebski”, intimate friend of a range of trolls, fronted up to give her 2 cents worth of homespun theology. And 2 cents is all it is worth.

We’d like to suggest that “Debski” gives up on the amateur theology and withdraws from bigotry.

Here’s “Debski” AKA Deborah Daldy of Western Sydney. She likes walks on the beach and blatant bigotry.

You can read all the rest of the comments here