Councillor Elise Chapman claims that her opposition to a mosque in Bendigo isn’t on bigoted grounds, yet her comments on Twitter on 18th and 19th of June 2014 suggest that much of that opposition comes from a belief that Muslims are generally rapists and that the building of a mosque is a ‘concern’ because it may increase the likelihood of rape. Chapman’s comments also seem to suggest that Australians don’t rape women.

This is despite Australian statistics on rape stating that 87.7% of women who are raped know the perpetrator. Note: Muslims make up less than 3% of Australia’s population.

Here’s some more about rape: 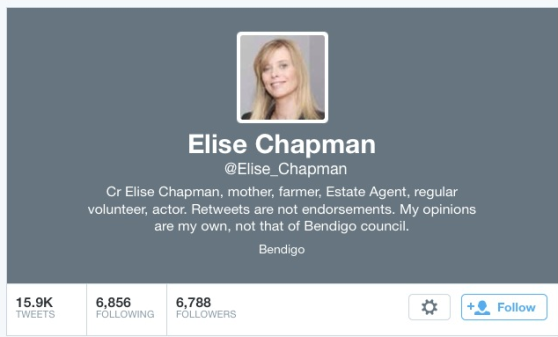 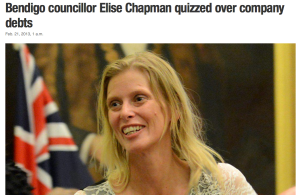 Meet Aaron Robertson of Ballarat who does not want the Muslims of Bendigo to have a mosque. So keen is he to rally troops to the cause he even formed his very own “Defence Leage (sic)” back in September with its very own manifesto.

And one lone member – Aaron himself.

Aaron went a bit shy on us and closed his profile for a while but it is re-opened so you can go and see for yourself what a  bigoted loser forceful crusader he is.

Now there is already an anti-mosque group which according to its own page statistics seems to mainly consist of 25 to 34 year old Muslim-haters from Melbourne. 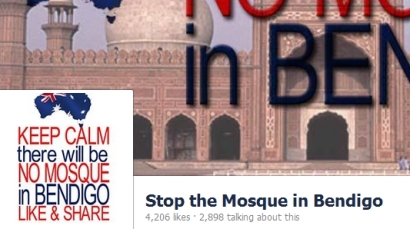 In other words the usual suspects.

Seems that neither Ballarat nor Bendigo are too impressed with the idea of rallying behind the Islamophobe rabble. Maybe those defence leaguers need to lift their knuckles off the ground and learn how to spell.

Let’s see what the local Councillors say as quoted in the Bendigo Advertiser:

Cr Peter Cox noted the development needed to work through any issues with planning regulations, amenity and traffic management.

“But I don’t have a problem with any religious group applying for a planning permit to erect such a centre for themselves,” he said.

“It demonstrates diversity within our community and I think that’s a very encouraging aspect of Bendigo.”

Cr James Williams said a mosque would be positive for Bendigo and said it was “great to see it happen”.

“I think it’s great we celebrate other cultures,” he said.

“They must be reminded that to put some kind of objection in, it must have some basis, some grounds for it,” he said.

“You can’t object to something because you don’t like something.

“That’s not grounds for an objection.

Now maybe you are curious about these ferocious Muslims who want to have a mosque in their home town.

The ABC Open page can tell you more.

The creator of a Facebook page set up to rate the sexual performance of the residents of Bendigo that featured sexually degrading comments about people as young as 13 has been sentenced to a suspended jail term.

Josh Turner, 25, from the Bendigo suburb of Kangaroo Flat, was also banned from the social networking site for two years after he pleaded guilty in the Bendigo Magistrates Court yesterday to charges of using a carriage service to offend and using an online information service to publish objectionable material.

The community have been absolutely outraged by this. She is a young girl, still in school… her name has been trashed.

“He has invited people to join the group and make comments rating their past sexual partners,” he said.
Advertisement

“He posted them on the wall of the “root rate” feed. The page was not blocked and anyone could view it.”

Senior Constable Herman said a woman complained to police on June 2 about being named and sexually degraded on the site.

He said the woman was one of hundreds of people – some as young as 13 and 14 – who had sexually explicit things written about them on the site.

Senior Constable Herman said Turner was arrested on September 18 and made full admissions to helping create and administer the site.

“He said he had not read any of the messages before posting them on to the wall because there were too many,” he said.

Turner told police he created the page “out of boredom” and because there was “nothing to do”.

Informant Senior Constable Cameron Dean said his investigation into the page had unearthed half a dozen similar sites and a “massive” number of victims.

But Senior Constable Dean said only one girl – herself still under 18 – was prepared to take her complaint to court.

Turner’s lawyer Alex McLennan tried to argue that might have been because none of the others were offended by the site, but Senior Constable Dean dismissed that excuse.

“I’m assuming they were a little embarrassed by it. They didn’t want to go to court, especially with everything that had been in the media,” he said.

Senior Constable Dean said it had been hard to investigate the crime because Facebook was based in the United States.

He said police tracked down the accused through a story published in the Bendigo Advertiser.

Turner confessed to a Bendigo Advertiser journalist that he set up the page and issued an apology through the paper.

Senior Constable Dean said it was this admission that led to Turner’s arrest in September.

Mr McLennan said Turner’s creation of “Benders root rate” was a decision made by a young man using poor judgment.

But he argued that Turner’s culpability was diminished because he didn’t write the offending comments.

“He created the page out of curiosity. He had heard of them in other towns but noticed there wasn’t one in Bendigo,’’ Mr McLennan said.

“Within 24 hours he had 1000 comments in his inbox and 3000 friend requests. He acted recklessly in posting these up without filtering them.”

But Senior Constable Herman said the offending was at the “extreme” end of the scale.

“This victim is not only a victim on the day it occurred but is a victim for life. She will have constant reminders,” he said.

“The community have been absolutely outraged by this. A clear message needs to be sent.

“A term of imprisonment is entirely warranted.”

Magistrate Ian Von Einem said a victim impact statement had brought home to him the serious effects of the Facebook page.

“She is a young girl, still in school… her name has been trashed and she is worried it will affect future job opportunities.”

Mr Von Einem said he wanted to set an example. “But given these circumstances… and due to what I see as some naivety on your behalf, I am prepared to suspended this sentence.”

On top of the six-month suspended sentence, Mr Von Einem placed Turner on a community corrections order for 15 months, including 150 hours of community work and a sex offender assessment.