The general discourse when it comes to our Indigenous Australians is that they’re all heavy drinkers and petrol sniffers. Obviously, 223 years ago there wasn’t a drunken, drugged up Aboriginal in Australia. European settlers (whose primary currency was rum) arrived here and introduced these vices to our native Australians.

Are only Aboriginals are drinking themselves into harm?

Many Australian health surveys have shown that Aboriginal and Torres Strait Islander people are less likely than non-Indigenous Australians to consume alcohol:

Drinking sociology and why Aboriginal people drink:
Aboriginal people often drink in groups but not to socialise. Rather, a group of drinkers ensures that there is always someone who can provide money for the next purchase of drinks.
The problem of drinking is aggravated by the fact that the various pensions and allowances by the government are paid on different days. Even if a drinker spent all pension money his financial ‘drought’ would be broken with the next government payment. Paydays have always been the heaviest drinking days.
Against all odds, some young Aboriginal children decide to stay abstinent particularly when they want pursue a career in sport.
Aboriginal history tells us why Aboriginal people start to drink. Over the past two centuries they have been exposed to dramatic changes in their lives, and even now they have to struggle for the very basic human rights.
Indigenous alcohol abuse is motivated by the breakdown of traditional social control mechanisms, a lack of means for establishing and ritually enacting (through ceremonies) group identity, a lack of traditional rules for alcohol consumption behaviours (as existed before invasion), the culturally infused sharing ethos (Aboriginal people share resources most of the times), resistance to imposed controls on Aboriginal society, a lack of processes for reducing tensions and frustrations occurring as a result of

Aboriginal men in particular suffer from the loss of their cultural status in the transition from a traditional to a welfare-based lifestyle. Many Aboriginal women, through their status as mothers, receive more welfare payments than Aboriginal men.

“You know how you destroy a culture? …You make sure that kids are born with alcohol foetal syndrome, they won’t be able to pass on the dreamtime and the culture.”

(Alcohol consumption in percent by age group for Indigenous and non-Indigenous people in Australia.)

“I turn away my own siblings if they arrive intoxicated. Some would say this is a rejection of my family. I say it’s a strengthening and educating of my family. I will not put my family and our plans and dreams at risk.”

At least half of all assaults in Sydney in 2007 were related to alcohol, prompting the City of Sydney to introduce a 2am lock-out for some hot-spots.
In 2007 there were 21,000 alcohol-related assaults across the state [of NSW].

While Aboriginal people generally drink less than non-Indigenous people, those who do so are more likely to drink at hazardous levels. Unfortunately, many reports focus on these results rather than the fact that generally they drink less.

Most persons stressed that not all Aboriginals had alcohol problems – many didn’t drink at all, or drank only very lightly, but the problem was that many of those who did drink did so very heavily.

At St Vincent’s Hospital in Sydney, you can see the “ugly side of Sydney’s binge drinking epidemic” [12]. Within 24 hours, the medical team had to attend to 65 people under 30, 90% of which had to be treated for alcohol-related injuries. Nationwide four Australians under 25 die due to alcohol-related injuries in an average week.

Fewer Aboriginal people drink daily or at least once a week than non-Indigenous people do. Many more Aboriginal people consume alcohol once a month or even less frequently. This is in stark contrast to the image the media tries to reinforce when reporting about “staggering quantities of alcohol” being consumed. 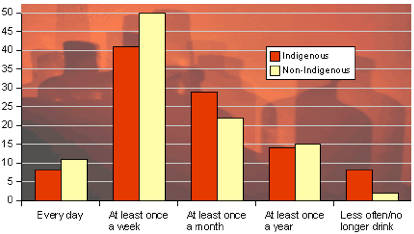 Frequency of drinking in percent of urban population.

This image published in the Time Magazine suggests that Aboriginal people drink heavily. The caption reads: “Staggering quantities of alcohol are consumed in drinking sessions in the bush around Borroloola.” But literature and surveys suggest only a minority engage in such binge drinking. 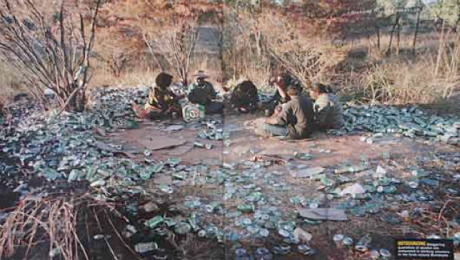 The article calls Aboriginal drinking in this remote outback town a “drinking epidemic”, claiming that “most Top End towns” share this fate and Borroloola is “just another community in the queue” for support plans from the NT government. The author mentions two examples of serious bodily harm inflicted by drunk Aboriginal people and claims that “such incidents are as common in the Top End as the crunch of green aluminium cans underfoot”.

This article was part of the magazine’s “Australian Journeys” special which was to “capture the spirit of the longest road in the South Pacific”, the Highway No. 1. I strongly dispute that this is the true ‘spirit’ of this remote community.

In his book Land is Life, published in 1999, Richard Baker tells the story of the Yanyuwa people most of whom now live in or near Borroloola, located 970 kms south-east of Darwin. Baker finds an altogether different situation:

The Aboriginal drinking problem in town [Borroloola] is highly visible while the large number of people living on ‘dry’ outstations is invisible. As a result, tourists tend to end up having negative stereotypes of Aboriginal culture reinforced.

It looks like the reporters of Time Magazine didn’t make the effort to visit one of the outstations (or ‘homelands’) where Aboriginal people control aspects of their life and put up ‘no grog allowed’ signs on the approach roads. This control over alcohol is denied to them in the town of Borroloola:

It should be stressed how different Borroloola is from nearby ‘closed’ Aboriginal communities in Arnhem Land. For example, the Yanyuwa would like to control the sale of alcohol to Aboriginal people in Borroloola but are unable to do so. 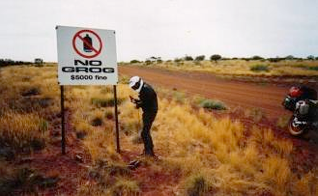 One theory claims that the conspicuous litter of beer cans and wine cartons is an expression of resistance towards white management of Aboriginal lives.

If we consider just the statistics for the remote and sparsely populated Northern Territory, around 25% of Indigenous people consume alcohol which is lower than the figure for all of Australia.

Strategies Aboriginal people use to avoid alcohol abuse are

It has to be kept in mind however, that such projects are in danger of failing until the causes of excessive drinking have been removed.