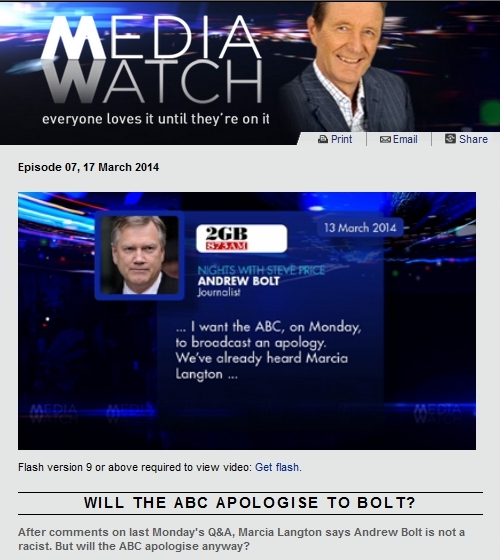 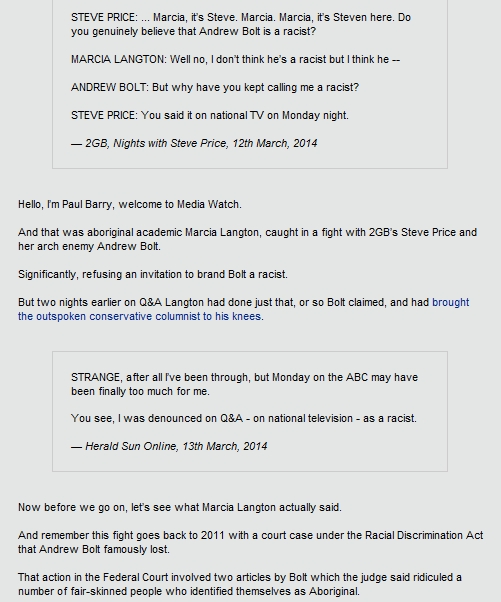 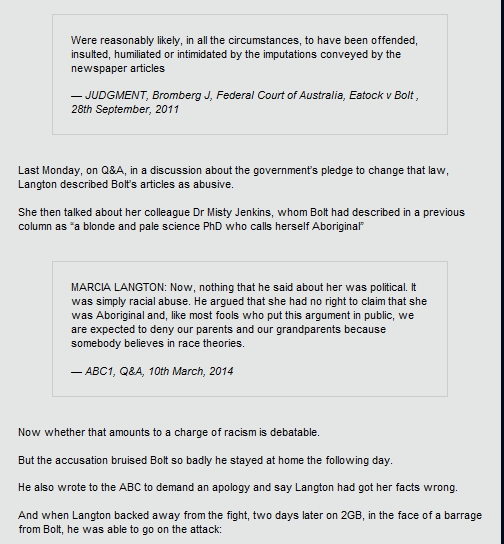 But the accusation bruised Bolt so badly he stayed at home the following day, presumably clutching a security blanket.

[The plaintiffs] Were reasonably likely, in all the circumstances, to have been offended, insulted, humiliated or intimidated by the imputations conveyed by the newspaper articles

i.e. the conditions necessary for a finding that a racist act had been committed had been proven.

We are still waiting two years later for the eminent judge to be the subject of a dummy spit.

And Mike Carlton expressed it beautifully

Now let’s see what Bolt wrote in his very own column. 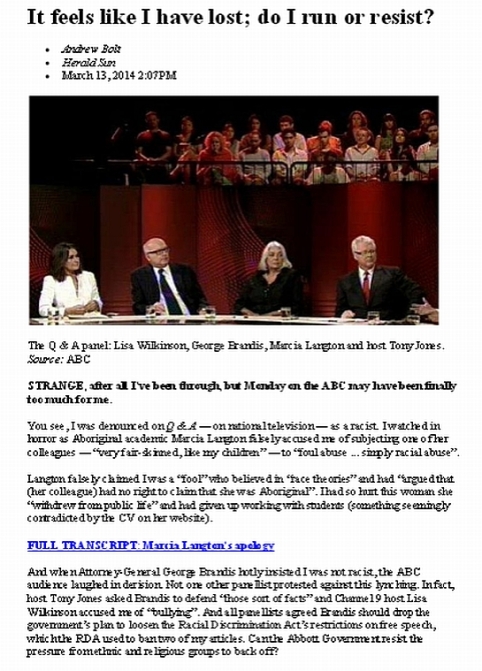 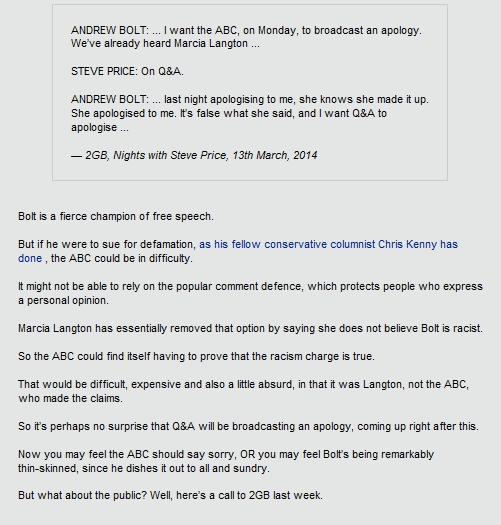 Now after Price and Bolt had finished bullying Marcia Langton on air along came listener “Warren”. 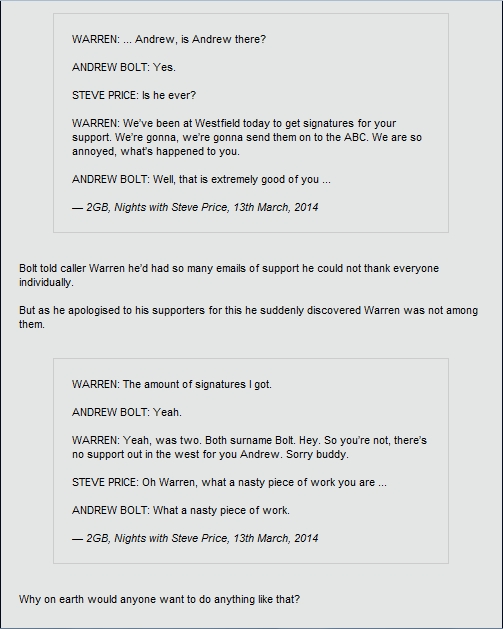 Remember Bolt likes to portray himself as a champion of “free speech”. Guess that means free speech only for him and his kind.

She (Professor Langton) then talked about her colleague Dr Misty Jenkins, whom Bolt had described in a previous column as “a blonde and pale science PhD who calls herself Aboriginal”

Now Bolt might be interested to know that it is not just Indigenous people who are offended by his words and their implications about Misty Jenkins.

And full marks to “Warren” for expressing our thoughts.

Andrew Bolt: his rights our freedom

Broadcaster Alan Jones is facing an online backlash after suggesting on national television that “left-wing radical students” were behind the Boston Marathon bombings and that Australia should reconsider its intake of foreign university students in response.

Really, you just said that Alan Jones? I have no words…

In a segment on Channel Seven’s Sunrise on Wednesday morning, the controversial 2GB host said Boston was a student city home to prestigious institutions such as Harvard University and the Massachusetts Institute of Technology (MIT), and suggested that students could be the culprits.

That is despite US authorities saying they do not have any suspects in the case and they do not know who is responsible for the blasts. No organisation has claimed responsibility for the attack that killed three people and injured more than 175.

“I wouldn’t be surprised if this was a conspiracy amongst students, left-wing radical students in Boston, and I think we have to think also very seriously here about our own student numbers,” Jones said on Sunrise.

“We’re very keen to have foreign students pay the way of universities in this country without a lot of discernment about who comes in. But I think the fact that we’ve been spared this kind of thing, touch wood, for so long highlights, as I said, the relentless work done by ASIO and all our police organisations.”

Alan Jones: “We’re very keen to have foreign students pay the way of universities in this country without a lot of discernment about who comes in.” Photo: Jim Rice

Former NSW treasurer Michael Costa, who was also on the segment, immediately responded that people shouldn’t “jump to conclusions yet about what’s behind all of this. Let the American authorities deal with it”.

“You know, America has got a history of domestic terrorism unrelated to the sort of broader jihadists’ terrorist movement and we don’t want to jump to conclusions,” Mr Costa said.

“But for Australia the lesson is clear. Complacency can’t be tolerated. We’ve got to support our authorities and we’ve got to ensure we’re vigilant.”

Jones responded that there were “a lot of things here that we can’t be told”.

The online response to Jones’ comments was swift and damning: 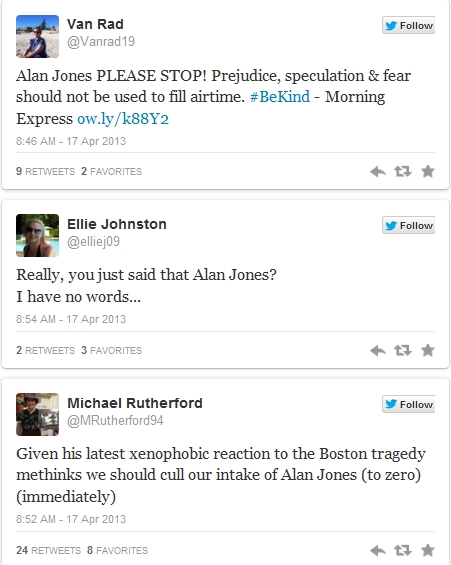 The third person to die in the blasts was identified on Wednesday morning, Australian time, as a foreign student attending Boston University.

The Chinese Consulate in New York said the student was from China, but officials were not authorised to release the male victim’s name.

Boston University said on its website that the the victim, a graduate, was among a trio of students who had gone to watch the race at the finish line.

The controversy surrounding Alan Jones is the latest to dog the radio personality, who was lambasted last year for claiming that Prime Minister Julia Gillard’s late father had “died of shame” over her “lies” during a speech at a Liberal Party function. He later apologised for the comment, but not before 60 companies pulled their ads on 2GB.

The federation said international students underwent a rigorous health and security check before they were issued with a visa for entry into Australia.

“‘The Department of Immigration and Citizenship conducts its own security screenings which we accept to be suitably appropriate,” the federation said.

“International students contribute immensely to Australian society in many ways – by volunteering their time in non-profit organisations, contributing to diversity in a university environment and sharing their cultures with Australia.”

This Facebook page has the most up to date list of organisations still clinging to this right-wing parrot.

Click the link to see which organisations still support Radio 2GB and Alan Jones’ popular talk-back radio program. Then use their contact details to let them know that you won’t be supporting their organisations until they withdraw their support for Alan Jones and Radio 2GB. 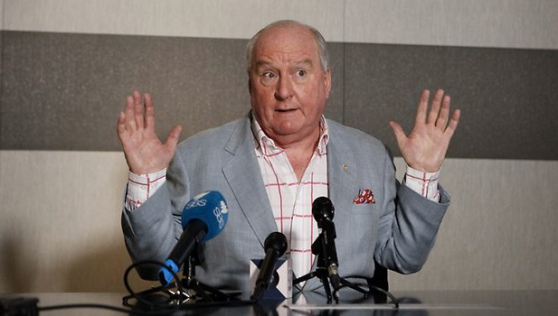 NSFWalking down the street (Language Warning) 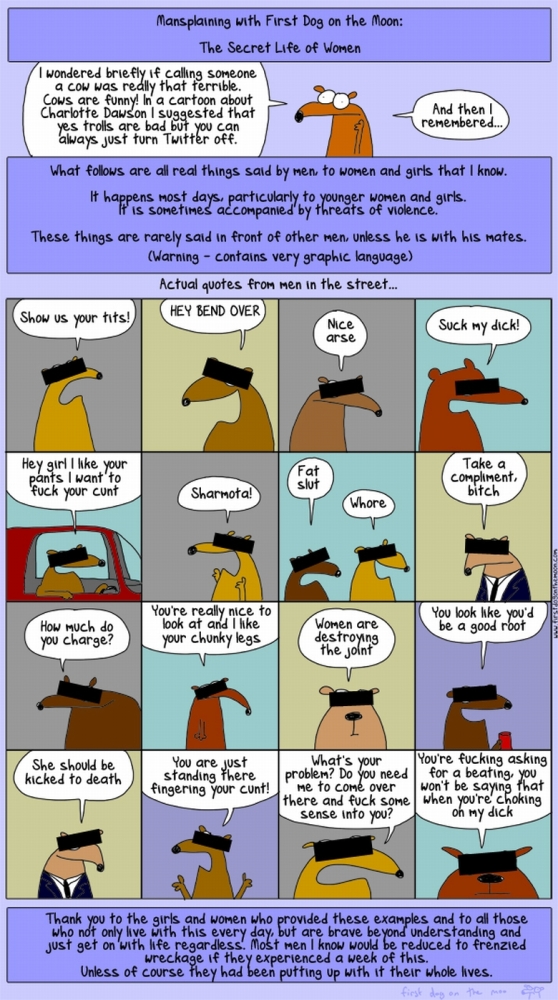 Source
And if you think First Dog is just a cartoon, take a look at Alan Jones and his chaff bag…