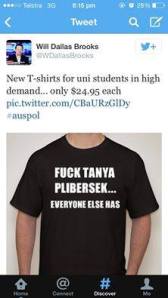 6 thoughts on “Willy Wanker and the T shirt Factory”