In its eternal hunt for candidates, One Nation certainly digs down the bottom of the dumpster. Here’s yet another one to join the departed and unlamented Stephanie Banister.

Marella Goodwin-Harris might even be marginally more intelligent, though an association with thuggish street gang the ADL does not help any perceptions of either intelligence or sound mental health.

Here she is bubbling with excitement as she announces her “endorcement” (sic) as a One Nation candidate to a bunch of ADL desperates huddled in one of their noisome Facebook groups, as they explode in a frenzy about the potential for enlisting signwriters for the coming struggle against normal mainstream Australia.

Marella is no newcomer to hate politics. Here are some of the groups she “likes” on Facebook. We are still processing the notion of an EDL group for gender- diverse people.

Sounds like these Fascist street thugs want to attract them over so they can more readily beat them up and harass them. 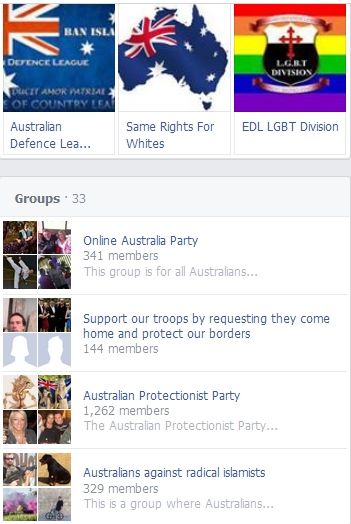 She is already a member of weirdo conspiracy theorist coven the Q Society and has a disturbing obsession with halal.

Here she is on yet another forum protesting that someone has unfriended her after finding out about her obsessive xenophobia.

We would think most sane people would be unfriending her too.

Here’s a lovely shot of Marella fighting the good fight against those lethal hordes of Muslamic terrorist schoolkids watched by a handful of what we presume are locals.

We are very familiar with Resident Action groups and can say that most of them are a good thing – an opportunity for locals to band together and to fight the encroachments of greedy developers and environmental vandals.

We are not so sure about HPRAG. We find no evidence of any ongoing concerns from them for sustainable development or for the preservation of high conservation value areas in this fast-growing area of Sydney.

So we are pretty much convinced that it is a front for Islamophobia.

This is a new and disturbing trend with the far right as they attempt to cloak their ratbaggery in legitimacy by attempting to hijack respectable causes such as the environment. Or secular humanism

— n
the policy or practice of members of a particular political group joining an existing political party with the intention of changing its principles and policies, instead of forming a new party

Want more evidence that it wasn’t “just about” development?