Drew Boyer is a young man, just 19 years old. He went to Wanneroo Senior High School in Perth, Australia. And he just called Australia’s prime minister a “slut” to her face. But the Australian media hasn’t made much noise about Drew Boyer, because he did it on Facebook.Prime Minister Julia Gillard recently took part in an event billed as the first of its kind: a live Q+A on Facebook where citizens were offered a direct line the country’s top official. Seems like a trendy, progressive way to connect with young, plugged-in voters; sort of like Obama’s much-discussed Ask Me Anything session on Reddit. Unfortunately, it also soon acquainted the Gillard administration with another novel aspect of social media platforms: they unleash the trolls, allowing the repressed assholes of the world to speak their mind with no fear of public recrimination.So as soon as Gillard had logged on to the hour-long event, which was intended to focus on the prime minister’s education policy, the filth started flowing. SkyNews details what happened:

A Facebook question and answer session with Prime Minister Julia Gillard on education turned sexist and nasty, with her office forced to remove offensive comments. Ms Gillard took to the social networking site on Monday to talk about her education policies. But the discourse turned ugly, with one man calling the prime minister a slut. Another man asked how her father was. John Gillard died last month.

‘Get my dinner ready’ posted another man, while one asked if her ‘pubes’ were as ‘radiant, shiny and glorious’ as his own. A number of other Facebook users labelled her the worst prime minister and criticised her voice, with one saying her voice and demeanour were like nails on a blackboard.

In a town hall or a real-life Q+A with Gillard, none of these people would have had the gall to say a word of the above. In fact, in any other forum, many of those comments would qualify as straight-up sexual harassment. Yet the semi-anonymity of the internet, the inherent sense of distance and disconnect from other real live organ-filled people, and the unreality engendered by staring alone into the reflective abyss of the laptop screen had, for a bunch of dirtbags, once again turned the act of responding to actual events into a fantastical video game. An ugly, juvenile, and sexist video game; the sort played on Facebook by millions of idiots every day.

The interesting thing here is that these users weren’t even cloaked in actual anonymity. These were people with verified Facebook profiles with photos up front and center, willing to call the prime minister a SSSSSSLLLLLUUUUUUUTTTTTT.

The guy who wrote that, for instance, is our 19 year-old manboy Drew Boyer, who uses the alias UglyStonerr.

And this is essentially what Drew Boyer did: he called the Prime Minister of Australia a “slut” to her face. She was sitting right there, after all, on her computer, in real-time, as Mr. Boyer typed his inflammatory comment. The digital words sprang into being as quickly as real ones, in the same amount of time. His name and identifying icon were right there on the screen. It’s quite possible that, in this case, it was clearer who made the comment than it would have been had Mr. Boyer shouted such a statement from a crowded debate hall. So I repeat: Drew Boyer called Prime Minister Julia Gillard a ‘slut’ to her face.

But consider this: If Boyer had indeed been sitting at a town hall meeting where Gillard was speaking, if he stood up and yelled “SSSSSLLLLLLLUUUUUUUUUTTTT,” he would have made the national news cycle. Easy. Australia would know the name of Drew Boyer. But barring the cameras and the bellowing, this was precisely the same thing: The same number of people, or more, were online for the Facebook Q+A as would attend a live debate event, give or take. Gillard, her aides, and the audience registered Boyer’s message just as clearly. A concise, sexist insult delivered directly to the Prime Minister, for all to see. So why is the media cutting Mr. Boyer and his ilk so much slack, when such actions would be roundly decried by punditry across the land if they were spoken aloud instead of tapped out on a keyboard? Why are we so slow to apply the same social standards to the digital spaces we’re increasingly occupying and communicating across?

The media, and many older folks in general, tend to look upon Facebook and Twitter and YouTube as either objects of curiosity or juvenile toys, and therefore take less seriously the messages scrawled out there. The younger, for their part, have grown accustomed to treating these platforms as an almost alternate plane of reality, where they can get away with saying stuff they typically wouldn’t in real life. Both are bullshit. These may be (relatively) newly shaped conduits for transmitting your ideas, but you’re still responsible for those ideas. Especially if you choose to share them publicly, in a chat room with the elected leader of your country.

Because, come on man, it’s as public as anything. As public as the fact that according to his own Facebook page, we know that Mr. Boyer prefers to use the free lubricant included in Four Seasons brand condoms and is against gay marriage.

So what is the phenomenon that makes Boyer feel comfortable making insulting sexist remarks about Ms. Gillard, while she’s sitting right there, reading them? He’s surely aware that all this information is easily transmitted. Judging by his profile, he’s used Facebook extensively. He knows how this works. So perhaps he’s simply not registering the significance of remarks made on Facebook. It’s not like he said them on TV or something. Those words just somehow seem less real on the internet, and he knows nobody is going to criticize his sexist views over some dumb comment he made on Facebook. The medium changes the message — except that it doesn’t.

There has to come a point when will we grant the space more gravity, when we absorb intuitively the fact that people who make such offensive comments should be help accountable for them. The point will come when we begin to treat these platforms with the scrutiny we do with other more formalized modes of communication, when we calibrate the strange blend of casual transmission and permanent record-keeping that defines social media.

But I guess it’s possible some people will always see Facebook and Twitter and whatever comes next as screw-around houses and nonsense receptacles, where our bad impulses and unseemly ideas can be deleted the next morning or six months or six years from now when we have that job interview. Maybe they’ll never actually absorb the new-found accountability social media demands of our comments. That Facebook doesn’t offer immunity to the composers of misogynistic or otherwise offensive remarks. The Drew Boyers of the world may simply never consider the fact that his future would-be employers might Google his name and find this article.

An Australian Facebook User Called the Prime Minister a ‘Slut’ to Her Face | Motherboard. 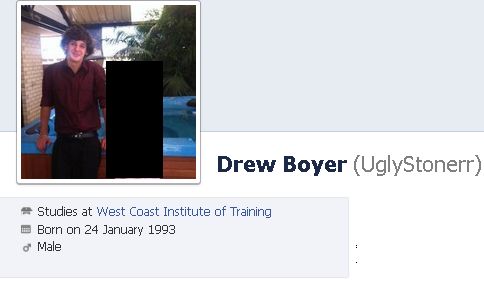 (and here are the worst of the comments on Brian’s article. ) 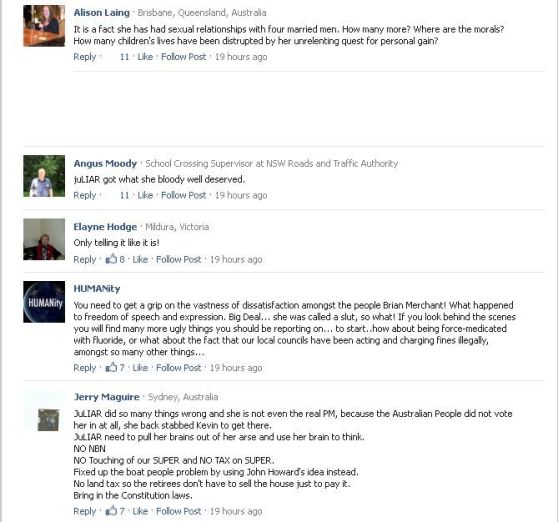 The Moral Defamers are joined by Alison Laing. Hummy then gives us an incoherent rant about fluoride (??) and a fake joins in with a cut-and-paste from every dreary far right piece of drivel out there.

Constitutional “experts” Fred and Brian kick off, interrupted by yet another Moral Crusader in the person of Brian Palmer.

Hey fellas, you are starting to sound jealous with all this obsession about people’s private lives.

Then again no one is too impressed by someone whose education consist of  “Mafia Wars”. 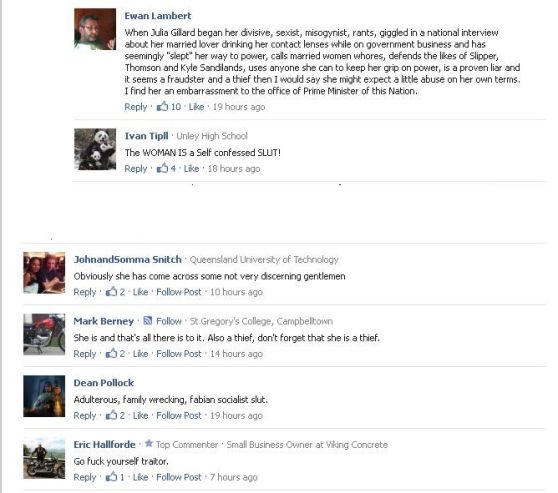 Ivan also goes under the name of Ivan Havel. We can hear the great Czech humanitarian, poet and statesman Václav Havel spinning in his grave at the thought of having his surname hijacked by this far right fail.

Too many spills off the Harley can bring on brain damage Ivan.

Mark Berney and Dean Pollock continue the defamation and the best description of  the contribution of the Family Snitch to the standard of political debate in this country can be summarised by the cartoon.

We don’t think anyone will f$#k Craig either.

And here’s a pic of Ivan and Peter so you can avoid them when shopping.

Elderly Internet besties Ivan Tipp and Peter Tolmie. All trolls all the time.