Recently the Australian Human Rights Commission announced a number of initiatives for public consultation on strategies for the promotion of anti-racism. 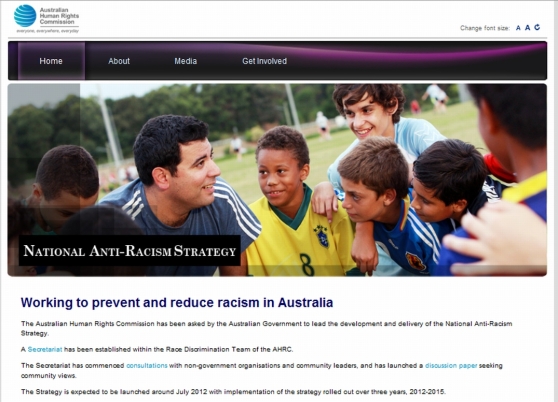 And not to be outdone, of course Facebook hate group Australia IsDying was right onto it as well, urging its members to send their privileged self-centred whinges and moans grievances to Canberra.

We are sure that amongst the ensuing correspondence will be an outline of the sort of “final solution” the bogots favour – accompanied by the usual flurry of finger-pointing at all their favourite hate targets.

And we think that the AHRC may be having an uphill battle if this Q&A question is going to be typical of public understandings and perceptions. Though it is good to know that the need to support and promote the languages of Indigenous Australians was felt to be so important…oh wait…

And here’s Scott Pengelly adding his two cents’ worth

Mistaking the many who ignored his dumb comment as signalling agreement, he then continues

Anyone with any personal ethics or feelings of self-worth would have ceased visiting this blog after that if it were such an affront to their beliefs. Not so “Grant”, since he possesses neither. He keeps coming back, just like virulent herpes or a persistent and odorous fungus.

And it’s not just on Facebook where you can find hard-done-by downtrodden white Strayans complaining about all that racism supposedly directed at them and their kind.

Note the standard line taken by “Robert”. He raises the spectre of a rash of race-based crime against white people but tantalisingly offers absolutely no evidence. As usual.

Back to Facebook for a minute where Christine Bailey and someone we assume is really called Kim Gibb are moaning and whinging about the mythical benefits supposedly paid to asylum seekers. As usual facts are not allowed to get in the way of yet another Strayan myth. At this rate the bogots will be rivalling the Greeks and the Scandinavians in the sheer volume of their fairy tales – except ancient mythologies are far more interesting.

And it looks like the bogots have even strayed over to that excellent Australian site Whirlpool Forums in order to share their tantrums with an unwilling audience of tech-heads, who in this instance were discussing the SBS reality show Housos.

Bogots have even managed to infiltrate the Fairfax parenting blog Essential Baby, specifically a forum discussing the recent ABC-TV series The Slap.

Who’d have thought that Mumma Bogot would actually have read an acclaimed Australian novel – though we best warn her that it was written by a gay man of Greek background before she plunges too enthusiastically into the heady waters of moaning about immigrants analysing contemporary literature. 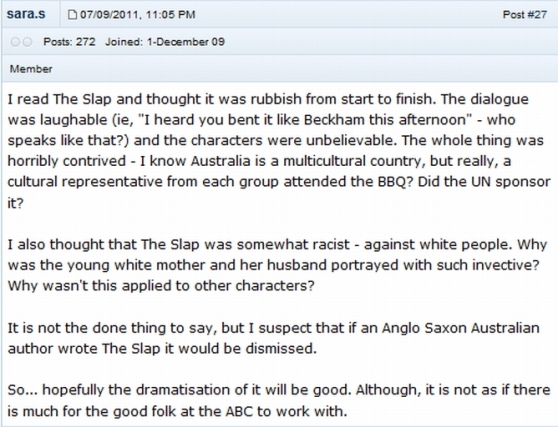 We will let Angry Aussie have the last word, as he highlights Straya’s Whinger in Chief and steel-jawed inspiration for hate-mongers and whiney bogots everywhere – Andrew Bolt.

This Blog is Racist Against Whites… Or Is It?

2 thoughts on ““Racism against Strayans””