Are you sitting comfortably?

At the beginning of last century there was a fashion for lurid Gothic novels usually featuring an innocent young girl ensnared by the hypnotic powers of a charismatic and diabolical mentor. The practice of hypnotism was in its infancy and the ability to apparently control minds was regarded with awe.

Let us introduce Trilby Steinberger who seems to have managed to incorporate delusions and diabolical behaviour into her repertoire without the need for any assistance from a charismatic mesmerist. Unless of course you think it is Luke Jenkins.

There’s Trilby at the local watering hole with friends. We have edited the friends out of the shot.

Now how do we know about this Trilby? Seems her Facebook friends are quite happy to let us know about her.

We’ll let Trilby’s odd self-description pass for now. If she wants to characterise herself as a murderous purple Dalek then she can do so.

And Trilby’s good friend Daniel typically follows his heads-up with a gratuitous swipe at Indigenous people.

On yet another occasion a friend’s enthusiasm overcomes his(?) discretion. Trilby must be some woman.

And here’s another enthusiastic fan named Kevin Huggins. Great to see that such a consummate artist has such caring friends.

So now Trilby admits she is the artist formerly known to us as Batty Burqa. In fact so enchanted is she by this fake profile she is chatting to she forgets to delete the conversation – oh well.

We figure that “Paul” refers to Paul Toohey, lately outed by one of his own as a part of  “John Harris”. The arse end of the Centipede no doubt.

But wait…what is going on here? Has Arse End disappointed Trills in some way? Has the whole Centipede slithered away?

And the implication that she knows Sergio? – well Sergio loves meeting people for coffee and actually invited one of us, though we at TAB have better things to do – like watching Inglourious Basterds once again to remember how to really deal with Fascists. 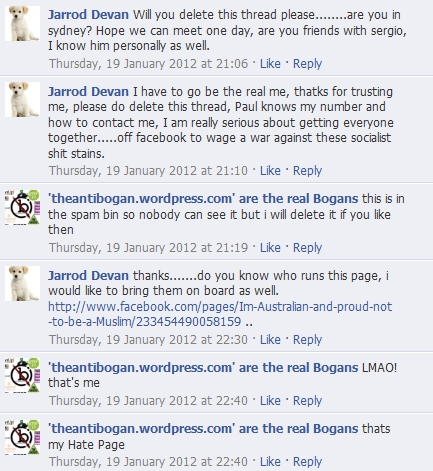 Well that anti-Muslim page is one of her hate pages despite her constant denials that she is racist or bigoted. Such as this one.

No doubt Trilby is keen to be seen by people as being normal. A normal bogot that is. And note the comment by oxygen thief Andy Watts.

Of course Trills manages to contradict herself elsewhere, but we are all getting used to that.

Don’t know which “moron” Trills is referring to since she seems to be surrounded by quite a collection of them.

Though it is rather disturbing to realise that she sees green maggots overrunning her pages. With fake profiles of themselves too.

Sorry to disappoint you Trills but maggots are white – so perhaps you need to clean up your 38 members? Get rid of the white maggots?

Now Trilby and friends get down to some serious stalking. 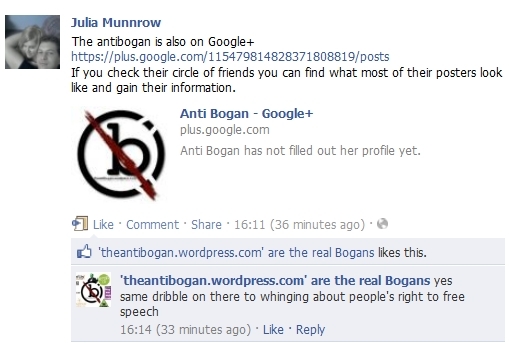 Now we have never figured out why racists like “Julia Munnrow” would be interested in the personal details of anti-racists.

Are they going to report them to the law for being anti-racists?  Nooo

Are these people going to be publicly embarrassed by being named as anti-racists? Nooo

Are these people going to be shunned by the community for being anti-racists? No, far from it.

Will “Julia Munnrow” and her kind stalk and harass them? Most likely. In fact they have done so already.

Replete with the skills obtained in her TAFE Photoshopping Photography course, Trills is happy to prominently display her very own personal gallery. In this presentation of Trilby’s artistry we have edited out photos stolen from the profiles of people who have offended the bogot community by actually disagreeing with them.

Here’s Trills and her mates workshopping the collection

However Trills and her cronies are not exactly burdened with the weight of high ethical standards – the same old pics have been splashed enthusiastically around every conceivable hate group. This is just a sample.

And while resting from her efforts to promote racism and bigotry she also manages to have a swipe at people who don’t like Tony Abbott – thus showing that criticism of politicians is not allowed in her strange little world despite the constant clamour of the bogots for “freedom of speech”.

And we do not think for a moment that Tony Abbott would welcome her as a supporter. Especially when she is accompanied by armchair Brownshirt Andrew Watts. 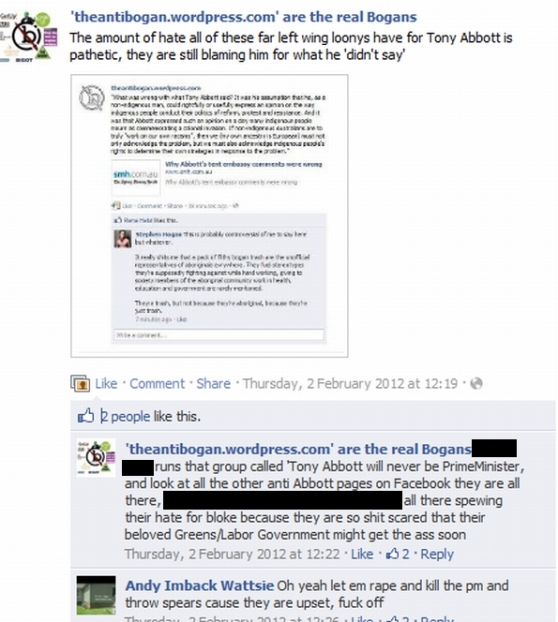 Meanwhile, back at Stalk Central, Aaron Cross of the Ryde area is getting very excited about the Antibogans being mentioned on the neo-Nazi site known to us here as Witless Towers.

At that stage Trills, as always showing her peerless artistic taste, had assumed the profile picture of the late shoe-throwing activist Peter (surname redacted) who has recently and tragically died of cancer. 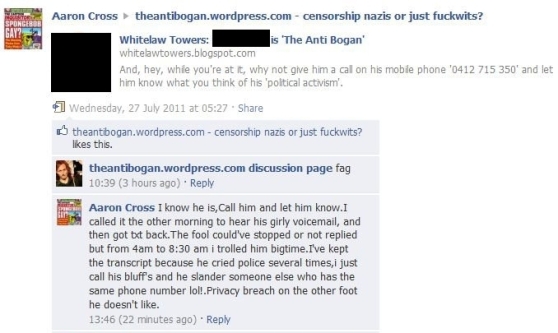 Aaron had decided to call the person he assumed was the “chief Antibogan” and by his own admission had continued to make nuisance calls to the person’s phone. Trills certainly keeps delightful company.

And Trill’s reaction? Apart from calling the victim a “fag”?

And speaking of ethics take a look at this

Posting people’s photos? What was that again about “double standards”? So it is OK in Trill’s dystopia to do one thing then to condemn others for allegedly doing the same?

There’s that obsessive sense of entitlement all these racist bigots have rearing its ugly head again. 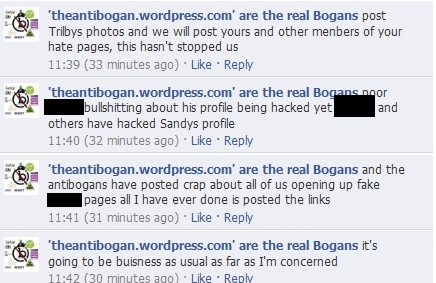 One project obsessing this little band of bigots artists is the continual spamming of a video of someone they do not like. We are not sure what this is meant to achieve. There is no point in undertaking dumb childish revenge fantasies art works unless someone is interested in seeing them. I mean, does anyone want to watch endless repeats of TV shows which were not all that good the first time around?

And now for the crowning artistic achievement. Covered in pirated photographs triumphantly displayed by Trills, Centipede and other members of their artists’ collective, with obvious and lovingly executed works from the great artist itself comes this exquisite piece.

Note Trilby’s enthusiastic embrace of this scurrilous and defamatory group.

And here is the most bizarre aspect of the lot.

Confused? Yes, we are too. A search of the DSM IV failed to find a particular psychiatric disorder which applied here.

But in case Trills is having second thoughts this has been reported to the police, to our entourage of public interest lawyers who work for us pro bono and the website owner has been informed of his obligations under the US Communications Decency Act (1996).

Village of the Damned

Extortion is an ugly word

Of all the stupid things

Should we name and shame online racists?

16 thoughts on “No Svengali with this Trilby”