For instance a fast-growing foreign religious sect prompted much concern amongst the Roman authorities and led to instances of persecution and vilification.

Rumors of sexual depravity, child sacrifice and other disturbing behavior, left a stigma on the early Christians. Perhaps worst of all was the idea of cannibalism. The concept of breaking bread originating with the last supper, partaking of the blood and body of Christ, which later came to be known as Communion, was taken literally. To the Romans, where religious custom dictated following ancient practices in a literal sense, the idea of performing such a ritual as a representation was misunderstood, and the early cult had to deal with many such misperceptions.

Now when the Jews left the Holy Land at the time of the Roman Empire they went to the four corners of the known world and settled amongst foreigners of various ethnic backgrounds and religious beliefs.

In only one part of the world were they systematically discriminated against and even massacred. This was Europe – except for that part of Europe consisting of much of modern Spain and Portugal,  Al-Andalus,  which was ruled by the Islamic Caliphate for hundreds of years.

One of the propaganda instruments used for oppression was the so-called  Blood Libel which stated that Jews took the blood of Christian infants to use in the making of matzah for the Passover festival.

One of the earliest European versions of the blood libel story occurred in 12th Century England.

A dangerous, unfounded rumour that Jews had kidnapped a 12-year-old Christian boy, William of Norwich, and stabbed his head to simulate Jesus’s crown of thorns was used to justify persecution of Jews.

While the Norwich account does not contain the element of the draining of blood and its ritual use, some experts suggest it is a story of the same type and generally seen as the entry point into England for such accusations.

Decades later, Pope Innocent IV launched an investigation into the claims, which eventually declared them false.

The blood myths persisted however, and were at times used to incite pogroms, or anti-Jewish riots.

In 1840, the disappearance of French Franciscan priest Father Thomas and his servant in Damascus, Syria, was blamed on the city’s Jews.

Authorities helped perpetuate allegations that the priest was used in a ritual sacrifice. At least 13 Jews were incarcerated and probably tortured over the disappearance; four died.

The incident sparked an international backlash for both sides. American Jews staged protests, while some scholars claim it bolstered anti-Semitic attitudes in Europe and the Middle East.

Thus do lies become “truths”. If they are repeated often enough they reinforce already groundless emotion-based prejudices and develop a hideous life of their own.

Now fast forward to the 21st Century and in many Western countries such as ours, Muslims have replaced Jews (for now) as the main objects of xenophobic hatred.

We journey to the island state of Tasmania where Jayden Smedley is happy to trumpet the latest variety of the “blood libel” story, this time targeting Muslims.

We know that evidence is frowned upon in the bogot’s Straya. In fact, much of their presentation relies on inflammatory evidence-free slanderous rhetoric delivered pulpit-style by one of their self-appointed “leaders”. Sounds a bit like a dodgy religious cult to us.

Now after that dissertation Jayden can hardly contain his excitement as without a shred of evidence he makes his next announcements to his fellow bigots.

Just as disturbing as the content is the sickeningly palpable excited relish which accompanies the disclosure. We get the worrying impression that this sort of material is a turn-on for both the protagonist and the intended audience. And we have seen this stuff before

And it is completely, entirely UNTRUE.

Jayden and his bigot friends are unable to cite one single real-world example except for apocryphal references which are probably invented, in just the way the Christians-as-cannibals and the “blood libel” were invented.

Watch Jayden get owned in this slide show.

While we are on this topic – PZ Myers is an evolutionary biologist and atheist commentator.

So tell us Jayden, with the many many documented cases of clerical child abuse in the Catholic Church, notably in Australia, shouldn’t you and the rest of the bigots be out there bellowing that all Catholics are paedophiles?

Of course all Catholics are not paedophiles. So why does Jayden want to smear Muslims with a similar charge on the basis of no evidence? 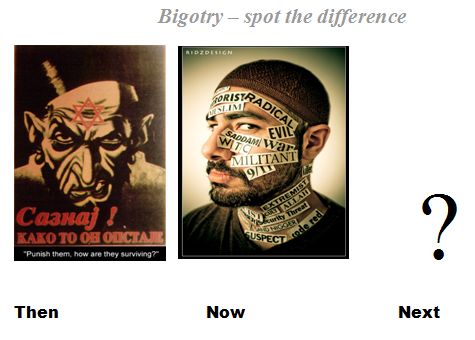 61 thoughts on “Thighs and Whispers”