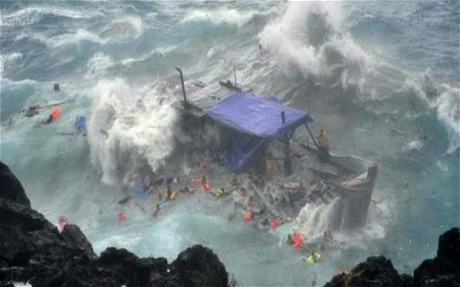 If you listen to the naysayers, and there are many who frequently say nay, there are roughly four things that have the capacity to end the world. Those are the gays, nuclear weapons, Amy Winehouse and asylum seekers.

There. I said it.

And I wonder whether they still believed it yesterday when a boat carrying some 80-100 refugees was smashed on to the rocks in churning seas at Christmas Island, like it was some kind of horrific metaphor for the welcome we extend them if they do happen to make it to shore. Those who have politicised the plight of asylum seekers, who claimed previously that we have offered the ‘red carpet’ to these folk have yet to clarify their remarks in the wake of the tragedy yesterday.

Well, those at the top of the tree anyhow. If you’re like me and you hate yourself, then you were probably listening to talkback radio and the views of those safely ensconced in their suburban lifestyles telling us we should ‘send them back’ and that ‘they got what they deserved’. Because apparently asylum seekers are broken Christmas fob watches with return policies.

The arguments some people use to solidify mass ignorance, are, however a little bit wrong. Or a lot wrong, depending on your ability to estimate spatial entities. Helpfully, I have compiled a little list of the most common arguments against asylum seekers which I am calling ‘The Big List of Reasons You’re Wrong About Asylum Seekers’.

I don’t quite know how to put this, so I’m going to go with a simple: no. They’re not illegal. They’re not any more illegal than that moustache you grew ironically last October. Both Australian and International Law allows those seeking asylum from persecution in their countries to seek it. That includes on our shores. Article 14 of the Universal Declaration of Human Rights also backs this up. And yes, they’re still allowed to seek asylum if they have no documents. Now, what you’re referring to as ‘illegals’ are people who overstay their Visas. There are thousands of these, mostly people from Western Countries who got sozzled in a backpacker bar and missed their connection flight back to Oxford.

2. They’re queue jumpers, look at them deftly skipping that queue!

I want you to show me, on a map of the world, where this queue is. Even if there was a queue, you’re missing the point. Let me put it this way. If you’re being chased by your worst nightmare – mine would be spandex bike shorts – and that nightmare can or will kill you, where do you run? Maybe you have two options. In one you have to cross many borders before finally boarding a boat that isn’t really a boat and hoping that maybe it’ll hold together until you get to a country that will probably lock you up when you get there anyway. The other option is to sit patiently in a queue, like you would at a bank before making a withdrawal. Except at the bank you won’t die. You see, in the queue you will get caught and persecuted and shot and killed or any combination of the above. You might die on a boat too, but what choice do you have? It’s a moot point anyway as in places like Iraq and Iran, where most of yesterday’s asylum seekers were from, Australia has no diplomatic representation and there is no standard queue to wait patiently in. What would you do?

Boat people? Sounds like a race of creatures that look predominantly like boats. This phrase is terribly disingenuous. They’re not boat people, they’re fleeing from horrific persecution and terrible lives. Show some respect.

4. Well, what if they come and steal our jobs?

You mean the jobs that you don’t want to do? In any case, accepting people into this country who want to work to make a better life for them and their families is good for the economy. They create demand, they will shop, they will spend money on other industries. Some will go on to study to be doctors like the great Victor Chang, others will pack fruit at the local markets. Research has shown the benefit to the US economy of all ‘illegal’ immigrants is some $800 billion. So, even if you don’t have a heart, the economic windfalls of granting asylum are robust to say the least.

5. Well, they won’t work, they’ll just sit on welfare and drain our resources.

There is absolutely no evidence to suggest this has happened, or will happen. There will be some, as there are in our own ‘culture’ where your cousin Ted spends too much time gurgling bong water and adjusting his crotch throughout the day.

6. We take too many refugees anyway, why let even more in?

I have a feeling that you would still say this when we take just one refugee. As it turns out, Australia takes about one refugee for every 1600 people. In Britain that number is one for every 600 and in Tanzania – the beacon of the developed world *cough* – they take one for every 75. These figures are from the turn of the 21st Century. And that’s all refugees – not just those who come by boat. We took fewer refugees this year than there were residents in my home shire – 14,000. And really people, I grew up in the sticks.

7. But they’re all Muslims!

Quick, everybody hide! Seriously, what the hell is your point? If what you really meant to say was ‘they’re all terrorists’ you are also wrong. The amount of refugees sent home due to character references, out of the 14,000 odd we take each year, is almost in the single digits. Are there bad apples? Yes. There were bad apples in my Year 12 class as well. No, really, some of those people were dicks.

8. If we just stopped the boats tragedies like this wouldn’t happen.

Equivalent: If we stopped the murderers we would have no more murders. Or: Why false logic has ripped our hearts out. First, those aren’t just boats. There are people on them. Those people need a home safe from danger. We can give them that. Secondly, if you manage to stop the boats then I also have a Rancor in my basement that needs feeding.

9. “If people are stupid enough to risk their lives in leaky boats it’s not my problem.”

That’s an actual comment on a news website. I truly think my cat understands more about this issue than this person does. And my cat tried to eat its dinner through an unopened can.

10. They should shut the back door to Australia and make them catch planes.

Please see all arguments above.

Disclaimer: I am not a refugee. I once sailed on a boat but it was quite nice and I did it on a lake and there was only a slight breeze. I have lived a fairly good life. I’ve never wanted for anything and my family has taught me the value of a ‘fair go’ and hard work. Once, I stood on a nail. It hurt a lot, but that is probably the most physical pain I have ever been in. The greatest threat to my life as a child was that nail in that sandpit. Today, it is driving through the city to get to my friend’s house because I am a bad driver and changing lanes scares me.

I will leave this country one day, on a plane, to go work overseas because I can. And I will probably spend a lot of my money on alcohol and cigarettes while pretending I am being very cultured. This is not the case for refugees who are forced to flee heart-stopping terror in their own countries in search of a better place. Australia could be that better place if we opened our hearts and our eyes. Currently, we can sit back and watch a boat of asylum seekers break apart on the rocks and admonish them for being silly. But we don’t know the exact kind of horror they have had to flee. We will never know it and therefore it is very easy for us not to care, or to send them back with the receipt.

Granting asylum to those desperate is not going to change the way you live your life. It might enhance our culture, like immigrants did in the decades before us, and it might boost our economy but you’re more than welcome to continue whatever it is that you were doing, and have been doing, for the decades these asylum seekers have been turning up in the tiny numbers that they do.