Late Mail on the APP Fail

The Saga of the Sad Little White Clown

The APP’s Views on Aboriginal Australians

The laughable irony all along is that all of these bigots think they have such massive levels of support for their hatred and intolerance, yet they fail over and over and over again. The consistent election results should be enough to send the message to these clowns that their support will never be more than 1 – 2%. But they went for it, again, and tried to organise an anti-Islam rally in the Newcastle suburb of Elermore Vale. It drew just four people.

The APP went public with their protest over the proposed Mosque, with spokesdummy Nathan Smith saying that thousands of Muslims would move to Elermore Vale and create parking issues. This is despite Elermore Vale having an existing population of a mere 28,000 people and no planned developments of apartment blocks or high rises. This is also despite there being an already existing 72 Mosques/Musallas/Islamic Prayer Rooms in NSW. It must be noted at this point that there was already an existing action group called EV CARES, who opposed the Mosque on the issues of increased parking hassles alone (despite the developers stating on the record that there would be on site parking), and even they wanted to distance themselves from the incredibly inept and unpopular APP.

Also of note – an existing Mosque in nearby Wallsend has been in existence for over a decade, with no bombings, mass suicides, acts of rape or pedophilia, community terrorism or public stonings. In fact, nearby residents affirm that the Muslims who use the Wallsend Mosque are friendly and hospitable, often inviting neighbours to functions, stopping to chat and bringing them food and gifts. This is completely oppositional to ‘information’ within APP brochures distributed around the suburbs stating that Mosques are a ‘focal point’ for the ‘significant’ amount of extremists within Islamic ranks.

Of course, the APP hides their blatant intolerance behind the idea that Islam is not a race, but a religion, and therefore can be the subject of discrimination, despite Australia’s freedom of religion laws. The APP and EV CARES both also hide behind the simplistic focal point of ‘parking issues’ in order to oppose the Mosque. Let’s have a quick look at the proposed Mosque location in Elermore Vale though (click to enlarge):

As you can see – PLENTY of room for the proposal’s on-site parking arrangements. The Mosque will not be even close to being as big as a supermarket, and look – there’s one for you to make your comparisons with right there on the map. In fact, the proposed Mosque is supposed to go in behind the giant Bi-Lo supermarket and carpark.

HERE is a suburb where ‘parking issues’ could be a legitimate argument against a proposed Mosque (click to enlarge): 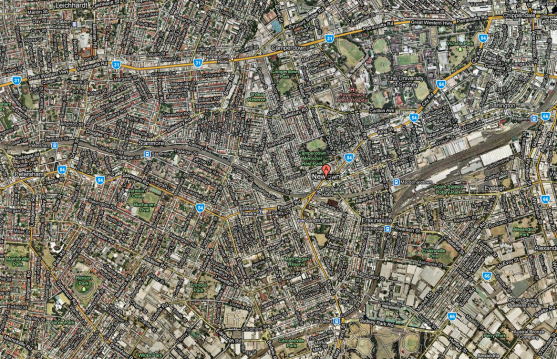 So anyway, it all boils down to this:

* People that oppose Mosques don’t give a flying fuck about parking issues, they’re just hate/fearmongers who don’t like Muslims. Hence, “It’s a cowardly racist who hides behind cars.”

* White supremacist groups like the APP are epic failures and do NOT have any public support. This is shown in election results AND in protest attendees.

163 thoughts on “Yet Another Epic Fail: “It’s A Cowardly Racist Who Hides Behind Cars.””