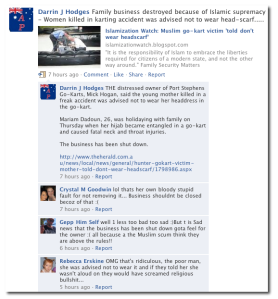 From the valiant keyboards of the ever-tolerant love, peace and happiness group ‘Fuck Off We’re Full’ comes the story of the death of a young Muslim woman, and the deep trauma it has caused to the man who owned the business.
Nobody seems to give a hoot about her or her family though…

Darrin and his clown car congregate all agree that the Muslim woman was at fault, and even provided some evidence of exactly how she was at fault.

Nobody was willing to mention the fact that the business was dodgy and underhanded at best, and that a young woman was now dead because of sheer complacency.

“The business has been shut down.

WorkCover enforced the track’s closure after investigations revealed the business, which has been running for 10 years, was not registered with the NSW Government authority.

A WorkCover spokesman said it was a legal requirement for businesses with “amusement devices” to be registered to ensure regular safety inspections were made.

“It missed safety checks, which involve inspections by engineers, because it wasn’t registered,” a WorkCover spokesman said yesterday.

WorkCover issued a second notice to the business for a go-kart, which did not have a “proper guard” on its chain drive.

“It can be very dangerous,” the spokesman said.”