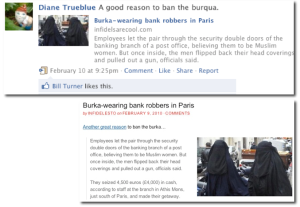 This is one of those fears that will constantly do the rounds. It really is void of logic, especially when placed into the Australian context. Here’s why:

Ladies and Gentlemen, Dianne ‘Trueblue’ would love to ban the burqa because she’s so very scared of their capacity to carry bombs and they go completely against our ‘women must be scantily clad, tanned and skinny’ way of life. She can’t find a story in Australia about Muslim women or anyone using a burqa to rob a bank, but feels that a story in France will suffice.

We aren’t scared of the burqa, are you? Can you be justifiably cautious around a Muslim woman? No. Its like being afraid of the dark. Only people with messed up over-stimulated imaginations can’t deal with it.